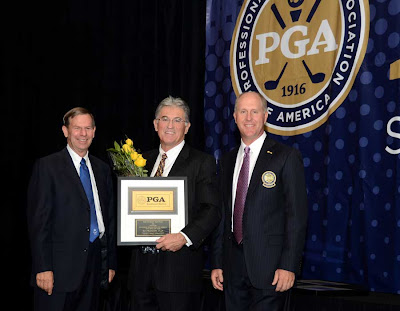 Francese has certainly had his share of significant contributions to the game and to the Southwest Section PGA. He has also served as a member Southwest Section P.G.A Board of Directors for 10 consecutive years and has a decorated career within the Arizona golf industry for over three decades.

An accomplished player, Francese has competed in the Goldwater Cup Matches eight different years and competed at the highest level playing in the 1977 P.G.A Championship at Pebble Beach, in the Phoenix Open three times and the Tucson Open twice.

His mark on to the golf industry is also prominent in the golf courses themselves as he has served as the construction project manager at nine different gol f courses including notable Arizona courses such as We-Ko-Pa Golf Club’s Cholla Course, We-Ko-Pa Golf Club’s Saguaro Course and the Gallery at Dove Mountain in Tucson, to name a few.

Today he is the principal of EF Golf management and consulting. Together, in a partnership with OB Sports, Ed Francese manages all aspects of the highly acclaimed We-Ko-Pa Golf Club that has earned a number of Top 100 accolades and who’s Coore-Crenshaw, designed Saguaro Course is currently ranked as the No. 1 “Best Course You Can Play in Arizona” by Golfweek Magazine in their State-by-State ranking.

Francese joins an esteemed group of Arizona golf industry professionals who have been inducted into the Southwest Section P.G.A Hall of Fame. Past inductees include former P.G.A President Brian Whitcomb, the late Johnny Bulla who was a legendary player and golf course architect as well as the late Arch Watkins who spent over 35 years serving the Arizona golf industry, to name a few.