'Based' on Golf, Ready to Serve in Fayetteville, N.C. 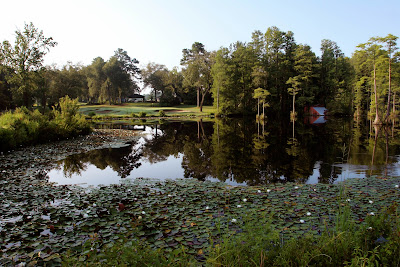 (FAYETTEVILLE, N.C.) — A first-time visitor cannot fully comprehend America’s military impact on Fayetteville, North Carolina’s sixth-largest municipality. That is until you drive along Bragg Boulevard past the miles of chain link fences that meet at Fort Bragg’s bustling front gates. Protective barriers separate a busy civilian thoroughfare from a dynamic national command system operating across America’s largest population military base. Fort Bragg is made up of nearly 55,000 soldiers and personnel and spreads across 251 square miles while touching four counties.

What happens on the other side of the barricades is not ours to know. Unless a visitor obtains clearance to play Ryder Golf Course (one of the two military golf courses at Fort Bragg along with Stryker Golf Course located just outside the gates), he or she will likely never get a glimpse of what takes place on the inside. Start mingling with the plethora of active and retired members of our armed forces around town, however, and you’ll begin to gain a greater insight into a pride that protects our nation.

As the home Fort Bragg and Fort Bragg’s Pope Field (formerly Pope Air Force Base), Fayetteville’s role as a military town is here to stay. For national security reasons, it’s comforting to know that our armed forces are well situated. Of course, what benefits our military personnel in and around Fayetteville also provides visitors to the city with an abundance of things to do and see as well.

As a historical haven, Fayetteville has deep (Highland) Scottish roots yet was named for Frenchman Marquis de Lafayette, a general in the American Revolutionary War under George Washington. It became the gateway to the world for many future residents by way of the Cape Fear River and the plank road system that started their journey from the state’s interior. In more modern times, it has become home to a large part of the military (Fort Bragg began as Camp Bragg in 1918 as an artillery training ground). On a much smaller scale, it was the site of the first Putt-Putt golf course the world has ever known.

With the advent of the nation’s longest north-south Interstate Highway in the mid 20th century (I-95), Fayetteville became more accessible than ever. Golf course expansion soon followed highway construction and eventually nearly a dozen courses within 30 miles of downtown would open their tee sheets to players. Eventually, public-access golf courses extended out from all quadrants of the city.

Classic golf course design names like Donald Ross, Willard Byrd and Ellis Maples crept into the region followed by later ones like Dan Maples and Davis Love III. The modern architects came to produce an array of golf course challenges that would not only link the great courses of neighboring Pinehurst with the I-95 corridor, but actually strengthen the legacy of the state’s Southern Sandhills region.

Coupled with its location south of the snow line and moderate year-round temperatures, Fayetteville has gradually evolved into one of the prime golfing locations, especially as it positions itself as a hub to other great golf destinations (Pinehurst is 30 miles west and Myrtle Beach about two hours southeast) throughout the Carolinas.

Despite its proximity to high-profile military installations, shock and awe aren’t everyday occurrences in Fayetteville. The city’s hometown atmosphere is a result of its southern positioning near the border separating North and South Carolina. It’s no surprise that the region offers wonderful diversity not limited to golf. In addition to the historical settings around town, there are theaters and film festivals to be discovered. Other attractions include the Airborne & Special Operations Museum, the Cape Fear Botanical Garden and the Cultural Heritage Trails that explore the city rich cultural history.

While much has changed in Fayetteville over the years, one quality has remained. It is still a gateway to the world for North Carolineans. With direct access to Interstate 95, it is now more than ever a portal to great golf for visitors to the state.

As the precise midway point for travel between New York and Florida, Fayetteville accommodates visitors with some 5,000 hotel rooms and 600 restaurants. While inland delights (including North Carolina barbeque at such renowned places as the Barbeque Hut) can be found on many menus, the city’s close proximity to the coast also means a great variety in fresh seafood.

Fayetteville’s hometown feel – sprinkled with some international flavor like the Bordeaux Tower, a replica Eiffel Tower (scaled at 1/12th the size of the original in Paris, France) created to attract shoppers to a main shopping district – has made it an ideal atmosphere for the game of golf to thrive. And there’s no better place to start your Fayetteville golf journey than with a multi-night stay at the world’s first Home2Suites, the newest addition to the Hilton Worldwide portfolio of brands. With its mid-tier, extended-stay hotel concept, Home2Suites was designed to offer stylish accommodations, flexible guest room configurations and inspired amenities for the cost-conscious guests. It fits in perfectly with the service oriented, environmentally friendly, and generally laid-back “attitude” that permeates present-day Fayetteville.

What makes the Fayetteville golf experience particularly inviting is the variety you’ll find across its well-manicured fairways.

From the thoroughly modern Love III design at Anderson Creek on the northwest side of town to the classic routing featuring a lavish panorama of Cypress trees, ponds and natural springs at Cypress Lakes to the southeast and the 1967 Gates Four Golf and Country Club with winding streams and wooden bridges weaving near the city center, there’s quite a wide range of looks to be found here. Throw in one of the most well-crafted names in golf – Bayonet at Puppy Creek (located on the south side) – and you'll discover a quartet of courses that makes for a memorable three-night,  four-day golf extravaganza.