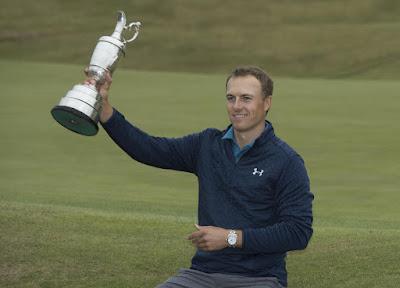 (Geneva, Switzerland) – Howling winds, thick rough and devilish bunkers: Carnoustie Golf Links, the venue for The 147th Open officially partnered by Rolex, is renowned as one of the toughest courses in the world.

The course, sometimes referred to as “the Beast” and “Carnasty”, is sure to test the elite field that will gather on Scotland’s Angus coast to challenge for one of golf’s most coveted trophies, the Claret Jug, from 19–22 July.

Accompanying them over four days of competition, as always, will be Rolex, Official Timekeeper at The Open since 1981 and whose commitment to golf for more than 50 years has helped forge one of the broadest, most enduring relationships in sport.

The bond between Rolex and golf is epitomized by its partnerships with some of the sport’s most gifted players, including Jordan Spieth, who will be seeking to defend the Claret Jug he won in such emphatic style at Royal Birkdale last year. The American trailed for the first time in the tournament after bogeying the 13th hole in the final round, but responded magnificently to finish birdie-eagle-birdie-birdie-par for a round of 69 and a 12-under-par total of 268 to win by three strokes.
He will be joined by fellow Rolex Testimonees who represent the sport’s New Guard, young golfers who play with integrity, skill and dedication. Like the Swiss watchmaker, they are defined by their pursuit of perfection, a fierce desire to be the very best they can be.

Their number includes: Brooks Koepka, who in June became one of only seven men in history to claim back-to-back U.S. Open titles, holding his nerve on the tough Shinnecock Hills layout to win by a single stroke; fellow Major winners Jason Day and Justin Thomas; and a group of players eager – and supremely able – to win their first Major, among them Daniel Berger, Matthew Fitzpatrick, Rickie Fowler, Hideki Matsuyama, Thorbjørn Olesen, Thomas Pieters and Jon Rahm.

LEGACY OF THE BIG THREE
This current group has inherited the mantle from previous legends of the sport, starting with Arnold Palmer, who in 1967 became the first golf Testimonee and was soon joined by his great rivals and friends, Gary Player and Jack Nicklaus. Known together as The Big Three, this trio changed the face of golf forever, expanding its horizons and winning a new global audience for the ancient game.
Following in their footsteps came Tom Watson, a five-time winner of The Open and eight Majors in total, then Tiger Woods, whose haul of 14 Majors is second only to Nicklaus (18) and includes three Open titles, in 2000, 2005, 2006, and Phil Mickelson, who won his fifth Major at Muirfield in 2013.

The names at the top of the leaderboard may have changed down the years but the quest for excellence has never wavered among the Rolex family of golf Testimonees, who continue to uphold the rules of etiquette, respect and sportsmanlike behaviour that make golf the great game it is.

STEEPED IN HISTORY
Established in 1860, The Open is golf’s original championship, staged annually on the finest links courses across the United Kingdom. Eight of Rolex’s Testimonees have won The Open, several of them on multiple occasions, for a total of 19 titles.

Carnoustie, where golf has been played since the early 16th century, features prominently in Open lore. Located on an exposed stretch of Scotland’s east coast, the course is long and narrow; at more than 6,770 metres (7,400 yards) it is one of the longest among The Open roster. This will be the eighth occasion the course has staged The Open, most recently in 2007.

It was here 50 years ago that Gary Player hit perhaps the greatest shot of his career to win his second Open. On the final day at the par-5 14th – named the Spectacles for a pair of bunkers that pinch into each side of the fairway some 64 metres (70 yards) from the green – the South African struck a mighty 3-wood that never wavered into a gale-force wind, finishing less than a metre (two feet) from the hole. He putted for an eagle that helped clinch a two-shot victory.

Since becoming the Official Timekeeper, Rolex’s relationship has developed into an official partnership with the championship organizer and guardian of the global game, The R&A.

Martin Slumbers, Chief Executive of The R&A, said the relationship between Rolex and The Open was a special one, based on a mutual appreciation for tradition and heritage.

“Golfing history has been written with Rolex as Patron of The Open, with nearly 40 Champion Golfers of the Year being crowned since its partnership with The R&A began, but at the heart of the relationship is a shared commitment to the global game, and Rolex’s support extends to the Rules of Golf, the new World Handicap System and expansion of the amateur game including Championships in the Latin America and Asia Pacific regions.”

SUPPORT AT EVERY LEVEL
As well as its partnerships with leading players, the bond between Rolex and golf extends to all levels of the game: professional and amateur, seniors and juniors. For more than half a century Rolex has contributed to the development of golf through its associations with the organizations responsible for advancing the sport, such as the USGA and The R&A. Rolex supports the governing bodies of the men’s and women’s tours, the PGA TOUR and the LPGA, as well as the European and Asian Tours, and the leading tour events and international team competitions, including The Ryder Cup when it is played in Europe, the Presidents Cup and the Solheim Cup. Along with The Open, Rolex’s presence at the pinnacle of the game is embodied in its patronage of The Masters Tournament and the U.S. Open, as well as the five women’s Majors.
Posted by Blogger at 5:17 PM