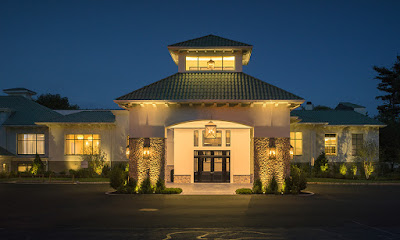 (EDGEWOOD, New Jersey) – Edgewood Country Club and Golf Kitchen Magazine announced ticket sales for the Inaugural Golf Kitchen | Edgewood Fine Dining Soirée and Golf Kitchen Culinary Excellence Awards Premiere which will take place October 4. This rare event will feature a collaboration of specialty guest executive chefs from some of the most prestigious golf and country clubs in the North-East and Florida.

“We are thrilled to collaborate with Golf Kitchen Magazine’s Diana DeLucia in creating the inaugural Golf Kitchen | Edgewood Fine Dining Soirée and Golf Kitchen Culinary Excellence Awards,” said Frank Benzakour, COO and General Manager at Edgewood Country Club. “This extravagant event is in a class of its own showcasing some of the very best cuisines the Golf Club industry offers.”

Edgewood's own Executive Chef Anthony Villanueva is the event’s lead chef and host. He will be joined by culinary teams from the well-accredited Sebonack Golf Club, GlenArbor Golf Club, Westchester Country Club and Addison Reserve Country Club. Guests will have the opportunity to interact live with Executive Chefs during the Opening Party, the fine dining sit-down dinner which has been collaborated by the participating Executive Chefs, and during the closing dessert party.

Additionally, the event and will include the first ever Golf Kitchen Culinary Excellence Award presentations, and a silent and live auction sponsored by Grand Stand Sports to benefit charity, recipient charity soon to be announced.

“It has long been my dream to create and launch the Golf Kitchen Culinary Excellence Awards,” said Diana DeLucia, Editor in Chief of Golf Kitchen Magazine. “Edgewood is the perfect location and Golf Kitchen and Edgewood look forward to inviting members and guests to be a part of this momentous premiere as well as sharing the experience of this incredible collaboration of industry chefs.”