(Springfield, N.J.) - The top of the match-play bracket ruled the day at Baltusrol Golf Club, as the top nine seeds, and 13 of the top 14, won their matches in the Round of 64 of the 71st U.S. Junior Amateur Championship. Overall, the higher seeds won 23 of 32 matches on Wednesday, with medalist Kelly Chinn setting the tone with a 2-and-1 victory over Trent Geritz in a match he never trailed. 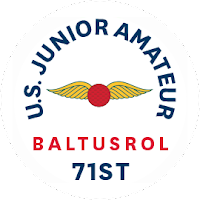 Chinn, 15, of Great Falls, Va., took the lead with a birdie on the par-4 second hole and never relinquished it, though his advantage never grew beyond two holes. His margin narrowed to 1 up when he bogeyed the par-4 13th hole, but he hit his approach shot on the par-4 15th hole to 4 feet, and his ensuing birdie putt moved him back to 2 up with three to play.

“I'm playing well, have a lot of confidence,” said Chinn. “I’m going to have to hit a lot better shots. I'm just going to sharpen my game and keep moving forward.”

Castillo, the No. 2 seed in match play, had a much more suspenseful match on Wednesday. The 17-year-old was facing No. 63 seed Bryce Kvick, who earned one of the last three spots in match play in Wednesday morning’s playoff, and was 2 down with six holes to play before miscues by Kvick led to a bogey and double bogey on Nos. 13 and 14, respectively, putting the match all square. Another bogey by Kvick on No. 16 opened the for Castillo, but he three-putted from 15 feet to keep the match even. It would stay that way until the 21st hole, when the Yorba Linda, Calif., resident rolled in a 20-foot birdie putt to end the match and advance.

“Well, I got the job done, but didn't get it done the way I wanted to. It wasn't pretty. I definitely didn't play to my standard as I did the last couple days,” said Castillo. “In the end, I'm still going on to tomorrow.”

The most dominant performance of the day belonged to Akshay Bhatia, of Wake Forest, N.C. Bhatia, 16, was victorious, 6 and 5, over fellow North Carolinian Fulton Smith. Bhatia, who was 5 under over 13 holes with the usual match-play concessions, jumped out to a 4-up lead through five holes thanks in part to birdies on Nos. 3 and 4. The left-hander hit his tee shot on the par-3 third hole to 5 feet, and his approach shot on the fourth to 3 feet.

The biggest upset of the day came from the No. 55 seed, Colin Sikkenga, of Kalamazoo, Mich., who defeated Canada resident and Albanian citizen Ilirian Zalli, the No. 10 seed, 4 and 2. Sikkenga was 1 up through 13 holes before winning Nos. 14 through 16 to close out the match.

Cole Hammer, the No. 8 seed and 2018 U.S. Amateur Four-Ball co-champion, was nearly upset by No. 57 seed Jackson Suber. Hammer was 1 down with three holes to play before hitting his approach shot from 175 yards on No. 16 to 6 feet and converting the birdie putt to square the match. Suber would miss a 9-foot par attempt on No. 18, paving the way for Hammer, who rolled in his par putt from about 3 feet to win the match.

What’s Next: Two rounds of match play. The Round of 32 begins at 7 a.m. EDT on Thursday, with the winners advancing to the Round of 16 on Thursday afternoon.

Notable:
Chinn was one of three 15-year-olds to advance to the Round of 32. He is joined by Ben James, of Milford, Conn., and Jolo Timothy Magcalayo, of the Philippines. James is the youngest player remaining in the field.

All three USGA champions in the field advanced to the Round of 32. In addition to Hammer, his 2018 Four-Ball partner, Garrett Barber, advanced with a 1-up victory over Jack Rahon, and Shuai Ming (Ben) Wong defeated Jake Beber-Franker, 1 up.

Ryan Smith, of Carlsbad, Calif., who defeated Canon Claycomb, 1 up, will enter Thursday as the only 2017 quarterfinalist remaining in the field. Rayhan Thomas, who reached the semifinals last year, fell to William Mouw, 6 and 5 on Wednesday.

Quotable:
Karl Vilips (won 1 up vs. Julian Perico): “I feel like I've conserved my energy pretty well this week. I've just come off a couple 36-hole events, and I think the way I maintain my nutrition and hydration during the day is going to be key.”

Travis Vick (won 2 and 1 vs. Cole Ponich): “It's a different mindset from stroke play. You're playing the competitor instead of the golf course. So I kind of set a number, and that's what I want to achieve. Match play is completely different; the strategy changes, but I enjoy it as well.”

Shuai Ming (Ben) Wong (won 1 up over Jake Beber-Frankel), on winning after his opponent missed a 4-foot putt: “You know, I would never like to win in that way, in that fashion. I would like for both of us play well and the winner edge it out. So, I didn't really want to see him miss that putt, but I just had to do whatever to win, so I'm really grateful.”

William Mouw (won 6 and 5 over Rayhan Thomas): “I didn't play too well in stroke play, but knew as long as I get to match play, tables will turn. Hit some fairways and hit some greens and finally made some putts. My caddie, Rick, gave me some good reads and I hit the lines and made them.”

Akshay Bhatia (won 6 and 5 over Fulton Smith): “This week is going to be a huge grind, especially on this tough of a golf course. Just kind of realizing that pars will really win a lot of holes. If you sneak a couple birdies in, that's also a bonus.”

Cole Hammer (won 1 up over Jackson Suber): “This is really good. I'm excited for the rest of it because I feel like I can beat anybody, that's for sure, after this match. It was a dogfight and I was lucky enough to come out on top. It was anyone's match.”
Posted by Blogger at 8:17 AM