(PHOENIX) – Troy Mullins, a rising star in women’s long-drive competitions with aspirations to play on the LPGA Tour, signed with PING as a Brand Ambassador, PING President John K. Solheim announced today. One of only four women to break the 400-yard-drive mark, the Los Angeles native was a track-and-field standout at Cornell University competing as a heptathlete, planning to attend law school and perhaps be an ambassador to China (Chinese is one of four languages she knows), when she was re-introduced to golf her senior year. She was hooked. “The feeling of really hitting a great ball is addicting, and that’s why I think everybody sticks with golf,” Mullins said on a recent visit to PING. 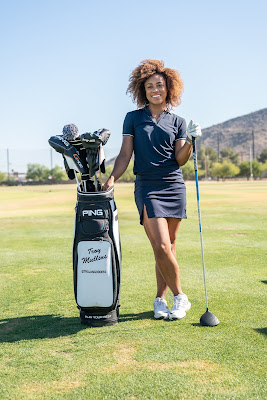 “Troy is such an inspiration with her athleticism, her intelligence, and her mission to inspire more women and girls to take up the game,” Solheim said. “She radiates so much positivity and enthusiasm for golf, we wanted to give her more exposure as a Brand Ambassador while providing her the PING technology to excel in long-drive competitions and pursue a career on the LPGA Tour.”

Mullins embraces the energy of long-drive events and sees them as a vehicle to bring more women and girls into traditional golf. “It’s been fun to bring people to the sport in another way,” she said. “Long drive is different. It’s very loud, very fast. It’s like the WWE of golf.” In her strong presence on social media, she said her message is simple: “Win or lose, every time you do something in life be positive about it, be proud of the progress you’re making. And be positive toward others and be genuine because people are watching.”

In her first long-drive competition in 2012, Mullins employed a PING Anser driver and placed second with a drive of 321 yards. “I fell in love with long drive and the PING head at the same time!” In 2017 she won her first event and is consistently among the leaders on the long-drive circuit. “PING has been a big factor in my success so far, and having their sponsorship is a huge deal for me going forward,” Mullins said. “PING’s technicians will make sure my drivers are fit for my swing so I can get the most I can from every drive. I’m excited to see where that performance advantage can take me.”

Mullins, who is self-taught, said she leverages her training in heptathlon (100-meter hurdles, high jump, 200 meters, 800 meters, long jump, shot put, javelin throw) to generate power. “You have to use what you’ve got, and you definitely use your entire body to hit the ball far. I use a lot of the speed I developed in track and field to kind of jump at the ball at impact and just let it go.”
Posted by Blogger at 11:13 AM