Flick joins six notable PGA golf professionals selected for their service to the game
(CARLSBAD, CALIF.) — Celebrated golf instructor and TaylorMade brand ambassador Jim Flick headlines a group of seven golf legends to be inducted into the 2011 PGA Golf Professionals Hall of Fame. The ceremony takes place on Nov. 2 at the PGA Museum of Golf at PGA Village in Florida. 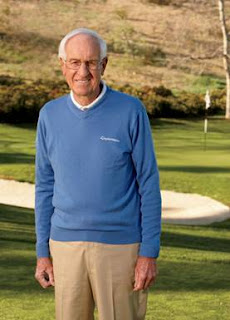 “I am thrilled and honored that the PGA has recognized my efforts, and I can never be appreciative enough of all that the game has given to me and the opportunities that it’s afforded me in my career,” Flick said. “And I am very proud to be a member of the TaylorMade family—this year, at age 81, I’ve had my best year ever, and much of that has to do with the MAT-T technology and other resources that TaylorMade provides that help me reinforce what I teach. I feel very fortunate to be involved with such a wonderful company.”

Flick, 81, is one of the most prolific instructors in golf history, having taught the game in 23 nations while elevating the business of golf instruction. He was elected to PGA membership in 1959, and served as director of instruction for Golf Digest’s Schools while guiding more than 1,000 multi-day programs. He was co-founder with legendary Jack Nicklaus of the Nicklaus-Flick Golf Schools (1991-2003); operated his own Jim Flick Premier School in 2002; and served as a lead instructor for the ESPN Golf Schools (2003-05). Flick joined TaylorMade Golf Company in 2006, providing instruction at The Kingdom and serving as company ambassador.

A native of Bedford, Ind., Flick is the son of Bedford City Champion Coleman Flick, whose influence inspired his son to take up the game of golf at age 10. Flick would go on to attend Wake Forest University on a basketball scholarship, rooming for six months of his sophomore year with Arnold Palmer, then a junior. Flick attempted tournament golf by turning professional following graduation in 1952 before serving in the U.S. Army from 1953-54.

In 1955 he became assistant professional at Evansville (Ind.) Country Club, followed by PGA head professional positions at Connersville (1956-60) and Losantiville (1961-74) Country Clubs; treasurer of the Southern Ohio PGA Section; and Section president (1967-69). Flick was director of instruction at Desert Mountain in Scottsdale, Ariz. (1986 through 2005), before joining The Kingdom at TaylorMade. Flick has been a frequent contributor to national golf publications for decades, and was involved with or authored five books: Square to Square Golf (1974), Square to Square in Pictures (1974), How to Become a Complete Golfer (1980), Jim Flick on Golf (1997), and Swing Analysis by Jim Flick – Jack Nicklaus, Simply the Best (2007).

No stranger to top honors, Flick was named the third recipient of the PGA Teacher of the Year award in 1988, and the ninth instructor inducted into the World Golf Teachers Hall of Fame in 2002, the same year that he was inducted into the Southern Ohio PGA Hall of Fame. Flick was also a 1995 inductee into the Wake Forest University Athletic Hall of Fame and was one of Golf World’s Top 10 Teachers of the 20th Century in 1999. Flick has coached more than 200 Tour professionals among countless amateurs and premier junior players, headed by Nicklaus and Tom Lehman. Flick resides in Carlsbad, Calif., with his wife Geri.

“It is with a great deal of pride that The PGA of America welcomes seven individuals to the PGA Golf Professional Hall of Fame, who by their life’s work have made significant and lasting contributions to The PGA and the game of golf,” said PGA of America President Allen Wronowski. “These seven PGA Professionals have exhibited the passion for building the game and serving others that extends beyond their job description, and their names will be forever inscribed among the leaders in making golf the greatest game.”