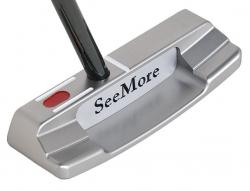 SeeMore also ramps up SPi Teacher and Fitter Certification Program
(Franklin, TN) - Belly putters are certainly on a roll right now and golfers everywhere are wondering if the belly putter can help them too. In the past month there has been an explosion of belly putters being used on the PGA and Nationwide TOURS, and the interest is spilling over to the serious and avid amateur golfer. SeeMore finds itself in a perfect position to help golfers looking at this trend.

"Our phones in the past few months have been as busy as they were the week after Zach Johnson won the Masters using a SeeMore putter in 2007," stated Jim Grundberg, SeeMore's CEO. "Everyone wants to know about the benefits of a belly putter, and the word is out that the SeeMore belly putter featuring RifleScope Technology is one that is a perfect design for this type of putting."

According to Ted Gallina, SeeMore's Tour Director who saw Kyle Reifers cash the largest first place check to date on the Nationwide Tour this year ($144,000 at the Nationwide Children's Hoppital Invitational) using a SeeMore belly putter, the belly trend is a natural fit for SeeMore.

"A belly putter is not for everyone, but any SeeMore belly putter is a natural extension of the RST (RifleScope Technology) alignment system that already helps the golfer set up in a more consistent, neutral position that promotes a better stroke and release of the putter head in a standard length putter. This release is critical to putting a great roll on the ball, and the belly putter simply reinforces these important putting fundamentals by anchoring the end of the putter to a spot near the golfer's belly.

"Players would normally go to a belly putter because they have problems with consistent set up and consistent ball position, pushing or pulling putts, and not releasing the putter head. Those are exactly the same reasons why any player would also want to take a look at a standard length SeeMore putter," continued Gallina. "A SeeMore belly just gives them another option, completely in line with SeeMore's already proven RifleScope Technology."

With a SeeMore belly putter, SeeMore's signature red dot will be hidden at address, and will remain hidden during a perfect belly stroke. SeeMore has been offering a wide range of belly models for years, and is in position to meet the growing needs of this market. SeeMore belly putters may be viewed at SeeMore.com.

SeeMore has also recently launched the SeeMore Putting system to golfers in the form of introducing the SeeMore Putter Institute, where golfers and instructors will be able to come together in person and online to share these fundamental ideas about how to improve putting performance, including the new discussion about belly putters.

SPi is a learning system based on the simple fundamentals of finding proper grip, alignment, stance, and posture that allow a natural, free, and simple putting stroke on each and every putt. It is based on the technology built into the SeeMore putter itself, and on the refined teachings of SeeMore Global Ambassador Pat O'Brien - putting instructor to Zach Johnson, and many other top PGA Tour and developing players. O'Brien has been teaching the SeeMore System around the world for more than 12 years, ever since he watched his good friend the late Payne Stewart benefit from the SeeMore putting system to win 1999 US Open and lead the tour in putting statistics that year.

O'Brien set out to train the next generation of young players to become better putters through use of this system, which he saw would benefit players of all levels. Since 2001, his students Zach Johnson and Vaughn Taylor have become widely known as two of the best putters on tour, with a Major Championship, nine PGA Tour Victories, $32 million in earnings, and numerous Ryder Cup and President's Cup appearances between them.

The SPi program teacher and fitter certification program is managed day to day by PGA member Ted Gallina, SeeMore's Director of Instruction and Tour training. Becoming SPi Certified will help golf teachers formulate a complete teaching plan to help their existing students and recruit new students to become great putters using the SeeMore system that has won two Major Championships and set numerous putting records on the PGA Tour. It is a complete game plan, which will give any golf instructor a new level of confidence in the proper teaching and fitting involved in putting instruction. Becoming certified to teach the system initially consists of online training, but also includes personal coaching. Ted can be reached directly at the following email addresses: Ted@SeeMore.com or PutterInstitute@SeeMore.com.

RST Technology
SeeMore's patented RST, known by a visible gun sight on the top line, allows the golfer to set up the putter perfectly each and every time in relation to the intended target line. This is accomplished by lining up the black bottom portion of the shaft between two white lines and covering a signature red dot on the
heel of the top line. The process is like locking radar onto a target. The two parallel white sight lines frame the shaft and serve as an indicator that the golfer is in perfect position to make a consistent and reliable stroke.

SeeMore Facts
SeeMore originally became recognized when Payne Stewart won the 1999 U.S. Open playing a SeeMore
putter in the greatest final round putting performance in US Open History. The brand was re-launched
in 2007, and immediately regained worldwide prominence as Zach Johnson used a SeeMore FGP to win the 2007 Masters.

SeeMore's website at www.seemore.com and www.seemoreputtersblog.com has many new features about SeeMore's remarkable legacy, technology, and tour success. SeeMore putters are custom
made in Franklin, Tenn.