aboutGolf Takes a Swing for Ben and Gabbie

aboutGolf Supports Long-Time Advocate in Battle with Cancer
Hosted by Lebanon Country Club with LPGA Legend Jan Stephenson as Emcee
(Maumee, Ohio) - aboutGolf, the world leader in indoor golf simulation and golf performance technology, is sponsoring "Take a Swing for Ben and Gabbie", a golf tournament being conducted to support PGA Professional, Long Drive Champion and Trick Shot Mastermind Ben Witter and his family as they continue to battle cancer. 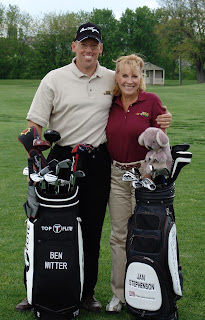 The event is being hosted by the Lebanon Country Club (Lebanon, Pa.) Oct. 10. Witter became an aboutGolf customer in 2003, when he installed an aboutGolf Simulator at Ben's Power Golf Learning Center, a teaching facility operated by he and his wife, Ann. Since that time, aboutGolf has partnered with Ben in many capacities.

LPGA Tour star and 16-time LPGA tournament winner Jan Stephenson will host and emcee the event. Stephenson is a long time friend to Witter and will entertain the guests with shots off the first tee and playing with groups throughout the day, signing autographs and finally speaking at the dinner. Stephenson earned more than $3 million on the LPGA Tour over three decades paving the way for today's young stars.

"Ben is a true inspiration and an exceptional golf talent," says Bill Bales, founder of aboutGolf and chairman of its Board of Innovation, of which Witter is a member. "He has been an advocate for our technology and a gift to the game and its players. We are honored to give something back to him and encourage widespread support from the golfing community."

Players will also be treated to performances on course by Remax World Long Drive Champion Carl Wolter and Canadian Long Drive Professional Brett Cleverdon. Players will have the chance to meet and receive some help from these professionals and observe their drives in excess of 400 yards.

All proceeds from the event will benefit Witter, his daughter Gabbie, who is also battling cancer, and his family. Interested sponsors and participants should contact Mike Swisher at (717) 272-1893 or mswisher@lebcc.com. Donations can be made beginning in the middle of October at www.takeaswing4benandgabbie.com.

About Ben Witter's Career and Battle with Cancer
The battle with cancer began when Witter, now 47, was 22 years old working as an assistant professional at Lebanon Country Club. Witter turned professional following his collegiate career, which was highlighted by three-time NCAA All American honors and two NCAA National Long Drive Championship titles at Indiana University of Pa.

While working as an assistant at Lebanon, Witter also pursued competition both locally and on the Florida Mini Tours and had aspirations of competing on the PGA Tour.

Shortly after turning professional, however, Witter was diagnosed with Adenoid Cystic Carcinoma of the upper jaw and salivary glands which quickly changed both his life and career path.

While recovering from surgery and undergoing radiation treatments at MD Anderson Cancer Center in Houston, Witter began tapping a golf ball up and down in his hospital room to pass the time. The tapping routine evolved into a daily show for his doctors and nurses and by the time he was finished with treatment, he would have a daily crowd gathered in the hospital to witness the newest trick or stunt that he had mastered.

The little show that was born in the hospital grew over the years into a career that has now taken Witter to 38 states and 14 countries. In his shows, Witter uses his eye hand coordination, strength, balance and ball control to perform one of the most sought after golf trick shot shows in the world.

Over the past 25 years, Witter and his wife, Ann, have raised five children and continue to operate Ben's Power Golf Learning Center at Fairview Golf Course in Lebanon, Pa.

This past April, the Witter's youngest daughter, Gabbie was diagnosed with Ewings Sarcoma, a rare bone cancer for which she is currently undergoing chemotherapy treatments and surgery.
Posted by Blogger at 9:19 PM