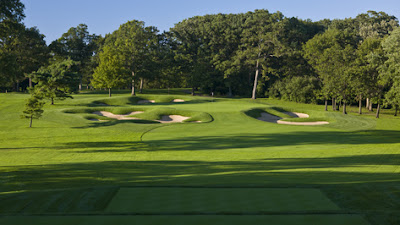 (LEMONT, Ill.) - GOLF Magazine released its biennial list of the Top 100 Courses in the U.S. and Cog Hill's Dubsdread was ranked No. 89. This is Dubsdread's second appearance on this prestigious list. The Jemsek-owned golf facility and home course of the PGA Tour's 2011 BMW Championship appeared for the first time on the list in 2009 after a $5 million renovation to the famed course.

"This is one of the industry's toughest lists to get on because it combines public, private and resort courses, so the competition is very tough and we are thrilled to be ranked again," said Frank Jemsek , CEO, Cog Hill Golf and Country Club. "I am honored that Cog Hill is recognized as one of the premier public facilities in the country and we take great pride in providing all golfers an opportunity to experience a tour caliber golf course like Dubsdread."

Cog Hill's Dubsdread underwent a $5 million renovation by renowned golf course architect Rees Jones in 2008. The comprehensive renovation upgraded the course's features and restored the strategy, design integrity and overall character inherent in the work of original architects Dick Wilson and Joe Lee. Dubsdread has been home to the PGA Tour's BMW Championship in 2007, 2009-2011 and the Western Open from 1991-2006.

Cog Hill was the only public course among the five Illinois courses that made the list. The other courses that were ranked are; Chicago Golf Club (No. 15), Shoreacres (No. 36), Medinah No. 3 (No. 37) and Olympia Fields North (No. 86).

Cog Hill Golf and Country Club is one the premier public golf facilities in Chicago. Located in Lemont, Ill., Cog Hill features 72 holes of championship golf, a year-round learning center and a newly-renovated 35,000 sq. ft clubhouse. Dubsdread is the home of the PGA Tour's BMW Championship. For information on Cog Hill, call 866.264.4455 or visit www.coghillgolf.com.