(CARLSBAD, Calif.) – TaylorMade-adidas Golf Company has announced a contract extension with PGA Tour superstar Dustin Johnson thru 2015. Johnson, will continue to play TaylorMade clubs and the Penta TP ball, feature the TaylorMade logo on the front of his headwear, use a TaylorMade staff bag and wear adidas Golf apparel and footwear. 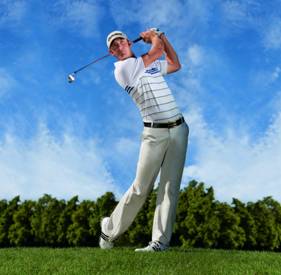 "I believe that TaylorMade and adidas Golf make the best golf products in the world,” said Johnson. “From day one they’ve made sure that my equipment, apparel and footwear has been completely dialed in, helping me become a winner on tour. They’ve been like family to me and I want to continue my career with their support.”

Johnson, 27, won the opening event in this year’s FedEx Cup Playoffs - his fifth Tour win since joining the PGA Tour in 2008. Currently ranked No. 5 in the Official World Golf Rankings, he competed in the 2010 Ryder Cup Matches and will compete in the 2011 Presidents Cup in November.

"Dustin tops the charts in terms of talent, potential and charisma," said Bob Maggiore, vice president of global brand marketing. "He has the ability and determination to win anytime, anywhere, and the way he’s handled both victory and adversity during his first few years on tour has won him a huge fan following, and rightly so. He’s the real deal.”

Renowned for his athleticism and talent, Johnson’s big swing, deft touch and laid-back charisma have made him a fan favorite around the world. His seemingly effortless power makes him one of the Tour’s longest players – he currently ranks 2nd in driving distance – and his popularity has attracted plenty of attention off the golf course as well, where he has been the subject of numerous lifestyle feature magazine articles.

"Dustin is one of the most exciting, confident and magnetic young players in the world, and his athleticism and style continue to make him a perfect fit with TaylorMade-adidas Golf," said Chuck Presto, senior vice president of global sports marketing. "We’re thrilled to have him on board to showcase our brands around the world, and we’re glad he feels the same way.”