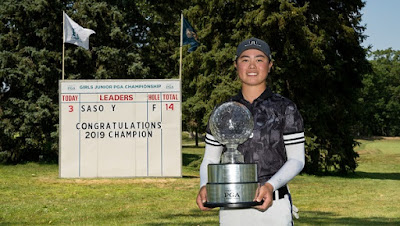 Saso, who trailed Rose Zhang by one stroke entering the final round, closed with a 3-under 67 to finish at 14-under for the Championship, two strokes clear of Jensen Castle.

“Winning in the United States is really special,” said Saso, who finished in a tie for sixth in the Girls Junior PGA last year. “It’s really hard to do since I live in Asia. I’m just really happy and thankful.”

2017 Champion Rose Zhang held the solo lead for most of the Championship, but consecutive bogeys on holes 5 and 6 slid the 16-year-old from Irvine, Calif., into a tie for first with Castle and Melanie Green at 10-under. It marked the first time since early in the second round that Zhang did not hold the solo lead.

Four holes later on No. 10, Saso took sole possession of the Championship lead with a birdie to reach 11-under, one ahead of Zhang and Castle at the time.

“My goal this week was to play steady and have fun,” said Saso. “I think I did that well.”

Saso struggled early with bogeys at holes 3 and 5, but her confidence never wavered. She went bogey-free the rest of the round and added five birdies, including four on the back nine.

“I didn’t feel comfortable on the front nine,” said Saso. “From the tee, it was really hard for me. After the two bogeys, I told myself, ‘it’s OK. I still have the back nine.’ It was pretty windy on the back, but my putting started to work.”

Saso is no stranger to success. She’s a two-time reigning Philippine Ladies Open champion, and she also earned two gold medals in the 2018 Asian Games. Friday’s victory adds yet another impressive win to the resume.

“I get nervous easily,” admitted Saso. “Lately, I’m trying to focus on what my goals are. That’s where I put my focus.”

Playing with Saso, Castle applied pressure throughout the round. The 18-year-old from West Columbia, S.C., matched Saso birdie-for-birdie on the back nine and finished with a final-round 67. Bogeys on Nos. 7 and 16 derailed Castle’s chances to overtake Saso for the top spot.

“I was only worried about myself,” said Castle, whose runner-up finish far exceeds her 2018 finish (T-43). “I’d been playing well all week. (Yuka) played great the whole round. We fed off each other a lot. Every time I drained a long putt, she drained it right after me.”

Castle, who’s headed for the University of Kentucky this fall, added, “I’m extremely proud of how I played. I did not expect this, but I’ll take it.”

Amari Avery made a late charge on the back nine. She birdied 14 and 18 and holed out on the par-4 16th for eagle. She fired a final-round 63 to reach 11-under for the Championship and finish in solo third.

Zhang entered the final round 11-for-11 at Girls Junior PGA Championships with under-par rounds, but she struggled to find her groove en route to a 3-over 73. She failed to make a birdie on Friday, which, along with three bogeys, caught up to her.

“I was actually feeling pretty comfortable on the course,” said Zhang, who finished in a tie for fourth. “The putts were burning edges, but they weren’t dropping. It was quite hard.

“(Yuka) had a lot of clutch putts. She struck the ball extremely well. She’s such a great friend and player. I’m really happy for her.”

Fresh off a third-round 63, 14-year-old Alexa Pano added to her highlight reel on Friday with a hole-in-one on the par-3 sixth. Pano used a pitching wedge from 127 yards for her second-career ace. She finished at 9-under in a tie for fourth, her second consecutive top-four finish in the Girls Junior PGA (2018: solo fourth).

With the victory, Saso earned the Patty Berg Trophy. If she maintains her amateur status, she has also earned a spot in the Second Augusta National Women’s Amateur next April.

“This will help me in many ways,” said Saso. “I’m really thankful for this experience.”
Posted by Blogger at 5:00 PM