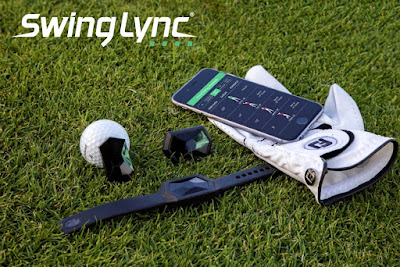 Using three wireless sensors and a corresponding phone app, this high-tech swing analysis system teaches golfers exactly how to position their body for a powerful and consistent swing. Golfers see a detailed snapshot of their body positioning data during the swing and receive measurable feedback to achieve improved positioning.

“I have obsessed over the golf swing since I was a kid,” said Nick Mahowald, founder and creator of SwingLync. “After studying engineering, I realized that the key to an effective golf swing is proper body positioning. While attempting to improve my own swing, I was inspired to create an accessible technology for the everyday golfer to help them master the subtle changes that will have a major impact in their overall game.”

The easy to use technology includes three wireless sensors, each about the size of a matchbox, that fasten to the golfer’s waist, wrist and back. Data is collected during every swing and instantly sent to the app, reporting measurements at the four most important moments of the swing – setup, top, impact and finish. The feedback allows golfers to identify their biggest swing flaws and track their improvement over time with historical analysis features. SwingLync customizes target values based on each golfer’s 18-hole handicap, making it a powerful tool for all skill levels from beginners to scratch golfers.

"What attracts me to SwingLync is the ability to measure spine angle, hip and shoulder rotation,” said Warren Bailey, golf instructor at Island Lake Golf and Training Center. “I want to be able to show a student the point where they should stop their backswing because taking it back any further will compromise their accuracy, and power as well.”

SwingLync will be available September 6 for pre-order through Kickstarter. Pricing will start at $179 for the entire system and accessories, with limited quantities available. The suggested retail price after Kickstarter will be $299.

“Everyday golfers have struggled with their swing flaws for far too long,” said Mahowald. “Our team is on a mission to change that.”