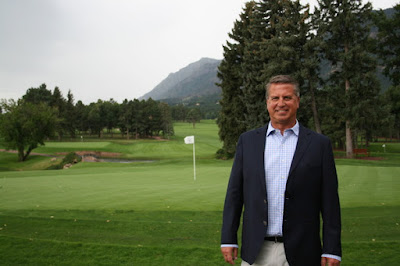 The Broadmoor’s Head Professional Given Highest Honor for Performance in Leadership, Service and Promotion of the Game of Golf

As the saying goes, golf is in Kelbel’s blood. A third-generation golf professional, Kelbel started hanging around the course when he was 5 years old. He learned to love the game at an early age from both his grandfather and father and has carried that passion and devotion within him since. Kelbel, a PGA member since 1993, began working in the golf business at his father’s pro shop. He spent seven years as the Head Professional at the Grand Hotel Golf Club on Mackinac Island before joining the team at The Broadmoor in Colorado Springs as the Head Professional.

“I am honored and delighted to have my work as a PGA Professional recognized with this award,” comments Kelbel. “Any professional worth his salt knows that I couldn’t have achieved this acknowledgment without the help of the dedicated and talented team that surrounds me. Hour-after-hour, day-after-day, week-after-week, I am proud to be a part of this Broadmoor alliance.”

To date, he has had a hand in helping 36 assistants go on to become Head Professionals and has sponsored more than 300 Professional Golf Management program interns at The Broadmoor.

Kelbel has served on the boards of the Southern Colorado Ronald McDonald House and Parents Challenge. He also created his own charity, Hemisphere Charities, that donates shoes to children who would otherwise not have access to them. Kelbel is active in the section’s efforts to grow the game of golf by being involved with programs for young people like The First Tee of Pikes Peak, the USCO FLAME (Finding Leaders Among Minorities Everywhere) and the Colorado Section Golf in the Schools program. He also works closely with the Colorado Springs’ military community by offering wounded warriors free golf instruction. It is his goal to bring two new people a month to the game of golf. He has assisted in procuring and implementing two major golf championships for the State of Colorado with a third coming up in 2018 (the U.S. Senior Open).

“Through our influence as golf professionals, we have a rare and unique opportunity to give back,” continues Kelbel. “I am a true believer that this is our obligation and our responsibility.”
Posted by Blogger at 4:12 PM