OMEGA Ambassadors McIlroy, Garcia Become 'Astronauts for the Day' at the PGA Championship 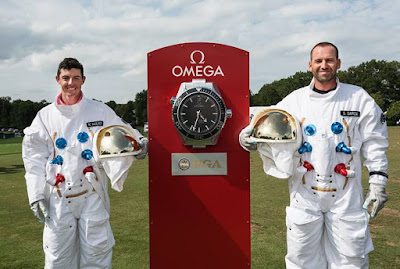 McIlroy and Garcia wear astronaut suits and drive a lunar rover to celebrate the 60th anniversary of OMEGA’s Speedmaster watch at the 2017 PGA Championship at Quail Hollow Club in Charlotte, N.C.

(CHARLOTTE, N.C.) - OMEGA, Official Patron of the PGA of America, combined their passions for golf and space in a unique on-course activity at the 2017 PGA Championship on Monday.  OMEGA’s Speedmaster timepiece was launched in 1957 and its official space legacy started in 1965, when NASA qualified it for use on its piloted missions. Since then, it has been worn on all six lunar landings and earned the nickname “the Moonwatch.”  As part of the Speedmaster 60th Anniversary, top-ranked golfers and OMEGA Ambassadors Rory McIlroy and Sergio Garcia donned astronaut suits and took turns driving a lunar rover to start PGA Championship week at Quail Hollow Club.

Most famously, as part of Apollo 11 in 1969, Buzz Aldrin stepped onto the lunar surface and in that moment, the OMEGA Speedmaster became the first watch ever worn on the moon.  The design has lasted the test of time, and it has been worn by astronauts, Air Force pilots, explorers, athletes and actors, as well as a growing community of fans from all around the world.

To celebrate this anniversary, World No. 4 McIlroy and No. 5 Garcia dressed up in “non-traditional golf attire” and surprised fans during the practice day.  Throughout the week, the lunar rover will be moved around Quail Hollow Club, challenging guests to find its daily location and offering a unique photo opportunity.

“I never thought I’d see the day a lunar rover touched down on a golf course, but it is a cool way to celebrate the 60th anniversary of the Speedmaster,” said McIlroy. “I had a lot of fun today with Sergio and wearing the suits gave the impression of being on the moon. Definitely a fun way to start the week with OMEGA, ahead of the PGA here in Charlotte.”

“It is one of the best things I have seen at a golf tournament,” said Garcia. “To celebrate the “Moonwatch” on earth during a Major together with Rory in the astronaut suits is pretty cool and unique. I am proud to be an OMEGA ambassador and supporting such great initiative at the PGA Championship this week.”

The 2017 PGA Championship, held Aug. 7-13, marks the 99th edition of one of the most anticipated golf events on the calendar.  The greatest golfers in the world will compete for the Wanamaker Trophy. OMEGA is serving as an Official Patron of The PGA of America for the seventh-straight year.

Hello Golf Fan's Don't Miss Out The PGA Championship Round Three And The Final Round.