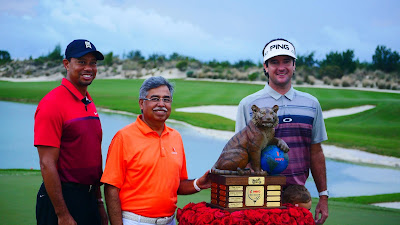 Watson banked $1 million with a 25 under overall and a three-shot victory. It was his ninth win on the PGA tour. Patrick Reed and Rickie Fowler finished in second and third, respectively.

During the award ceremony at the Albany Resort in New Providence, Watson gushed about The Bahamas. “This is a special place. I have my house up for sale in Iowa and I’d like to buy a house here. The atmosphere is great and everyone is smiling,” Watson said. “It’s been really special to come here and I can’t wait to come back.”

Bahamas Prime Minister, the Honorable Perry Christie, who attended on Sunday said the event was the realization of a dream for his administration. “We hoped that Albany would have a golf tournament that would attract the international media and this is the fulfillment of that dream, which started in 2003,” he said. “The Government of The Bahamas has been very successful in attracting sporting teams. All of this is taking place because it generates such an incredible amount of people coming to our country when this is being watched by people of the world. So the advantages are so profoundly significant to our country to see the fun that people are having here. People are saying that this is the first time that they have visited and they will be back next year for the tournament so one can see how it is going to be bigger and better.”

Over the past few years, the phenomenon of sports tourism has grown tremendously in The Bahamas. The country hosted the Miami Heat’s Training Session at Atlantis Paradise Island, the IAAF World Relays, Popeyes Bahamas Bowl, Central American Caribbean Bodybuilding; and come 2017 The Bahamas will host the FIFA Beach Soccer World Cup.

For more information on travel packages, activities and accommodations, call 1-800-Bahamas or visit www.Bahamas.com.
Posted by Blogger at 12:22 PM