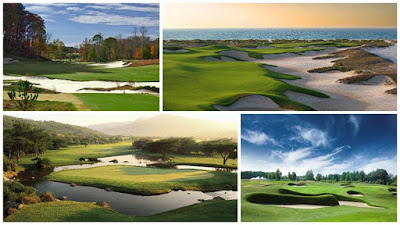 (RELEASE) - Gary Player Design saw November bring top accolades to many of their courses around the world, displaying the golf course design firm’s vast global portfolio, as well as its strong commitment to a sustainable and environmentally sensitive approach.

In the United States, The Cliffs at Mountain Park earned the coveted Certified Audubon Cooperative Sanctuary designation. The Gary Player-designed course joins an exclusive global group to achieve this important milestone. Open to members and guests for just two years, the golf community certainly took notice of the distinct challenge and natural beauty of the unique setting among the Blue Ridge Mountains. In addition to this wonderful achievement, Golfweek’s Ultimate Guide to Golf recently ranked the Gary Player-signature course No. 36 in the Top 100 Best Residential Courses in America.

“Usually it takes several years for a new course to establish itself in the golf world,” said Scott Ferrell, President of Gary Player Design. “Our purpose with Mountain Park was to create a golf experience that offers a wide range of playing scenarios unique to The Cliffs’ compendium of world-class courses while making sure we stayed true with our core values.”

At November’s World Golf Awards ceremony in Portugal, several courses by Gary Player Design in Africa, Europe, and the Middle East received awards in a wide range of categories.

The Gary Player Country Club at Sun City resort was named Africa’s Best Golf Course, and it will host the world’s best golfers the first week of December at the annual Nedbank Golf Challenge. A long time host of Africa’s Major, the tournament officially became part of the Sunshine Tour and European Tour in 2013.

For the second straight year, Modry Las Golf Club picked up Poland’s national prize as the country’s best golf course, which aims to benchmark excellence in golf and golf tourism. It affirmed Modry Las as one of central Europe’s leading golfing venues at a time when Poland is emerging as a bone fide golfing destination.

The Gary Player-designed Saadiyat Beach Golf Club took home honors as the United Arab Emirates Best Golf Course. Since opening in 2010, the course has gone from strength to strength, and 2015 marked yet another year in which awards and accolades have been bestowed upon the golf club, firmly securing its position as one of the jewels in Abu Dhabi’s golfing crown. The venue will host the first ever Gary Player Invitational in the UAE in 2016.

Earlier this year, the club was recognized by IAGTO in its Excellence Awards for 2015, picking up one of the Diamond Awards following high scores across the board from an expert judging panel.

“We are very fortunate to work with wonderful ownership and committed clients to bring out the best in Gary Player-designed courses. In 2016, we will open several projects ranging from championship caliber courses that could host Major championships to unique short-courses designed to introduce the game to new golfers,” said Ferrell.
Posted by Blogger at 11:38 AM