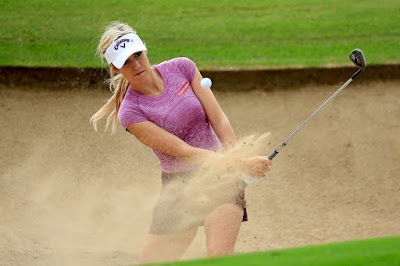 (NEW YORK, NY) –  Just a few months after her graduation from San Diego State University, Paige Spiranac began her career as a professional golfer. A viral sensation known by her 500,000 Instagram followers and millions of YouTubers for her stunning looks and trick shots, she officially began her golf career at this week’s Dubai Ladies Masters. Despite missing the cut in her first tournament, she continues to gain fans and attention the world over. What will this first year as a pro look like for Spiranac? Will her play soar along with her follower rate? With people across the country and around the world looking for answers, the best and newest online source for unbiased gambling reviews, OnlineGambling.lv posted odds on what to expect after this news broke earlier in the week.

“Paige Spiranac is already a star,” stated OnlineGambling.lv spokesperson Allan Kingsley Jones.  “How big and bright she’s able to shine will depend on how much she improves her game!”

Analysts at the website OnlineGambling.lv posted the following odds regarding the career for Paige Spiranac:

Fan Odds:
- Odds a fan runs onto course and proposes to her within the next year: 4/1
- Odds a fan commissions a plane to fly over a course with a message: 5/1
- Odds a fan streaks the course in her vicinity: 5/1