Gary Player's Design Influence Felt across the World in 2015 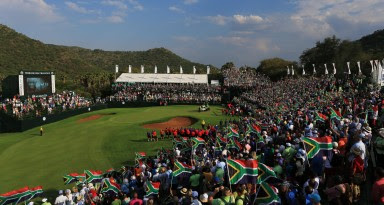 (RELEASE) - Gary Player shows no signs of slowing down, even after his 80th birthday and celebrating the 50th anniversary of his career Grand Slam. 2015 highlighted a milestone year for the Black Knight, as he continued to impact the golfing world and leave his global footprint across the golf course design industry. This year, the Black Knight team designed courses in countries world-wide including India, Italy, the United States, Democratic Republic of the Congo, China, Peru, and Vietnam.

More than 40 projects are under design or construction on five continents ranging from Gary Player Signature layouts to a collaboration with legends of golf to family style short-courses for those still learning the game.

“Gary Player’s global appeal and vast design experience have allowed us to shift our focus to virtually any emerging market around the world,” said Scott Ferrell, President of Gary Player Design.  “Declines in traditional markets simply don’t have as much impact when your leader is an international icon who is staying incredibly active.”

One of the most exciting projects in the works is for the historic Greenbrier Resort in the United States. For the first time, Gary Player, Jack Nicklaus, Arnold Palmer, and Lee Trevino are collaborating on an 18-hole Championship course with hopes of hosting a Major championship. With more than 1000 courses designed between the four golf icons, this one-of-a-kind experience surely will attract the attention of golf’s governing bodies.

On Player’s home continent of Africa, the Black Knight team was selected to design the first Championship caliber course in the Democratic Republic of the Congo.

“We are excited that our client is dedicated to developing a world-class golf experience, and we aim to implement design elements that will lead to the promotion and expansion of the game in this emerging market while captivating and enhancing the natural features of the site,” said Senior Designer Jeff Lawrence.

In the Far East, Vietnam has emerged as a golf destination as China’s government assesses sensible golf development criteria. Gary Player Design has been engaged in multiple locations and continues to expand its footprint in Southeast Asia.  Senior Designer Steven McFarlane, who has led much of our work in China, said, “Vietnam is a wonderful country with fantastic golf course sites, and with considerable government support, we expecting to be working there for years to come.”

In addition to designing new courses, several professional tournaments were played on Gary Player-designed golf courses around the world.

The European Tour hosted the annual Nedbank Golf Challenge at the Gary Player Country Club in South Africa, DLF Golf and Country Club in India was the site of the Ladies European Tour Hero Women’s Indian Open, and Indura Beach and Golf Resort in Latin America made a strong first impression on the PGA TOUR Latinoamérica at the 2015 Honduras Open.

During the year Gary Player Invitational charity series tournaments were played on Gary Player-designed course and hosted legends of golf and entertainment including Tom Watson, Annika Sorenstam, Michael Douglas, and Ronan Keating. The world-leading charity golf series raised more than $1 million for underprivileged children in 2015. With six events planned in 2016, The Player Foundation will charge closer to their goal of raising $100 million for charity.

“From golf course design to philanthropy, there is a great deal left that I want to accomplish,” said Gary Player. “I plan to stay active by helping those in need for as long as I can. It is my hope that I will be remembered for being more than just a golfer. I really want to impact people’s lives.”
Posted by Blogger at 1:43 PM