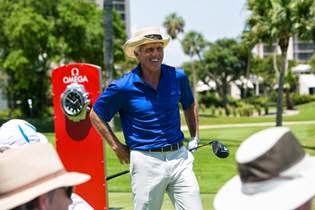 Kicking off the morning activities, the World Golf Hall of Famer put on an exclusive golf clinic at Turnberry Isle Resort and Golf club in Aventura, Fla., for approximately 60 OMEGA clients and golf club members. Norman spoke and hit golf balls for an hour on driving range, sharing his insight and knowledge on the golf swing that led him to become the number one golfer in the world for 331 weeks.  Guests then went out onto the golf course for a nine-hole shotgun-start golf tournament.

Friday evening, Norman was featured at a reception and book signing held at the OMEGA Boutique Aventura Mall.

The events at the OMEGA Boutique Aventura Mall and at Turnberry Isle Resort and Golf Club celebrated Norman’s relationship with OMEGA as well as the brand’s role as Official Timekeeper of The PGA of America and its support for the sport of golf in the U.S.

Greg Norman picked up golf relatively late at the age of 15.  Just two years later, he was a scratch player.  At the age of 20, Norman continued to concentrate on his golf game while working as a trainee in the Royal Queensland golf shop, making just $38.00 a week.

As Norman established himself as a professional, he became known as the "Great White Shark" for his legendary tenacity and pursuit of perfection.  In his prime, Norman’s practice sessions were notoriously grueling and he had a reputation as one of the hardest workers on tour.  This renowned work ethic combined with his natural ability propelled him to become the top ranked golfer in the world, a status he held for over six years.

He has won 91 professional events around the world, including two British Open Championships and 20 U.S. PGA TOUR titles. The culmination of an astounding golfing career came November 11, 2001, when he was inducted into the World Golf Hall of Fame. For his countless accomplishments, Norman garnered the highest percentage of votes of anyone that has been inducted into golf's most exclusive fraternity.

Norman serves as Chairman and CEO of Great White Shark Enterprises, and with the same relentless drive that propelled him on the golf course, he has led the brand to become a thriving and diversified multi-national company with interests in apparel, event management, real estate development, golf course design and many other merchandising and licensing initiatives.

Greg Norman, who is known as much for his entrepreneurial spirit in the boardroom as his swaggering style on the golf course, has quietly aided charitable efforts including helping raise more than ten million dollars for charities, including the CureSearch National Childhood Cancer Foundation and Ronald McDonald House.
Posted by Blogger at 10:17 AM