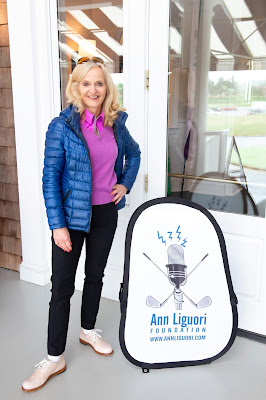 “We work so hard throughout the year for this charity tournament and I’m pleased that our event was sold out for the 20th straight year,” Liguori said. “I’m proud of the work the Foundation has done through the years to support so many worthwhile charities and causes! All who participate each year are in a position to help others and we take that mission very seriously.”

“And we had some divine intervention for sure, weather-wise,” Liguori added. “By the time we teed off at 1pm, the rains had left the area and our golfers, who remained festive and positive all morning, were able to enjoy a dry, full round of golf on the beautiful Atlantic Golf Club course!”

NHL Hall of Famer Grant Fuhr, winner of five Stanley Cups as the goalie for the Edmonton Oilers in the eighties, and avid golfer, was recognized with the Sports Honoree Award. Daniel Kindbergh of Brookfield Properties was named the Ann Liguori Foundation Charity Golf Classic Business Honoree recipient. Dennis Suskind, the President of Atlantic Golf Club, and ALF Charity Golf Classic committee member, Jerry Williams, were honored with the Volunteer Awards. TV/Hollywood Actor Gary Valentine, former NY Yankees catcher Rick Cerone, former NY Jets Running Back John Nitti, radio/tv/film personality Bo Dietl and former WNBC News anchor Jane Hanson joined in the festivities.   “This year’s tournament was the best ever,” says Suskind, who has been involved with Ann’s charity golf tournament since it first began in 1998. “The Atlantic Golf Club was in mid-season shape despite all the rain we’ve had in the area. We enjoyed hosting a great group of people who all came together for an important cause and the enthusiasm for this event and their support of the Ann Liguori Foundation speaks volumes of Ann Liguori and her dedication and commitment to make a difference in this world.”

Throughout the tournament’s 20-year history, some of the most prestigious courses have served as its venue including Westhampton Country Club, Hampton Hills Golf & Country Club, Olde Vine, Sebonack Golf Club, Maidstone Golf Club, The Bridge, Friar’s Head, and this year for the first time, Atlantic Golf Club.

Upon check-in, each golfer selected their own pair of PEAKVISION Sunglasses with patented Dual Zone Lens Technology and received a sterling silver Dune Jewelry custom and handcrafted ball marker featuring sand from Atlantic Golf Club on one side and the logo of the club on the other. They also received a Greg Norman Apparel golf shirt for the men; a Jofit golf shirt for the women golfers and volunteers; Imperial golf hats; Swing Lube ointment for aches and pains; NoNatz bug spray; a sleeve of TaylorMade golf balls; a golf bag beer mug; and a certificate to the Atlantic Golf Club pro shop.

After golf, participants got treated to a lively cocktail hour with music by Dan Liguori and delicious appetizers, followed by a lavish, sit-down dinner and awards program.