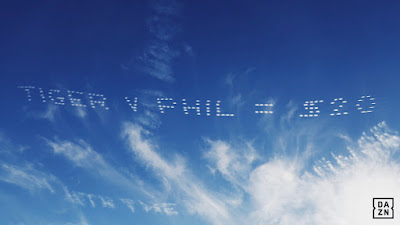 (LAS VEGAS) – The tiger is out of the bag, after global sports streaming platform DAZN came forward to claim the aerial writing display that lit up the Tiger v. Phil golf event at Shadow Creek.

The Thanksgiving stunt was organized by global sports streaming platform DAZN, in retaliation to overpriced pay-per-view, and restricted access to the event for sports-hungry fans.

At approximately 1:30 p.m. local time, with the players heading down the sixth hole, a squadron of six aircrafts entered the airspace above Shadow Creek Golf Course, and left a series of cheeky written messages in their slipstream.

The stunt saw DAZN drop 20 messages between 7-15 characters in the sky, that poked fun at the ludicrous price of PPV, and also teased the golfers as they made their way around the iconic course. All good fun. The spectacle lasted almost two hours, much to the amusement of the fans and players.

DAZN, which has shaken up the live and on-demand sports broadcasting industry since it launched in the U.S. in September on a global mission to bring premium sporting events to the masses, for a fraction of the cost of traditional PPV platforms.

A company spokesperson, said:
“Pay-per-view is a bad deal. We wanted to make a big statement to sports fans and show them that DAZN is on their side. We’re extremely proud to bring a global live and on-demand sports streaming service to the masses for just $9.99 per month. And with our one-month free trial, the Dec. 15 matchup between Canelo Alvarez and Rocky Fielding will be delivered to fans at no cost.

Last month, DAZN announced a ground-breaking partnership with boxing superstar Canelo Alvarez and Golden Boy Promotions that will take the Mexican sports icon off of pay-per-view for his next 11 fights and make him widely available on the DAZN platform for a low monthly subscription cost. Fans can download the app and tune in to see the first fight on Dec. 15 – Canelo vs. Rocky.

DAZN burst onto the scene in 2016, debuting in Germany, Austria, Switzerland and Japan. Its early success across Europe and Asia spawned launches in Canada (2017), Italy and the U.S. (2018). Just this month, DAZN announced plans to expand to Spain in 2019.

FULL LIST OF MESSAGES
PPV SUCKS
$19.99?
ON BLACK FRIDAY?
WHERE IS THE CROWD…
TIGER V PHIL?
IS THIS 1999?
WHERE'S SPIETH?
OR BROOKS
…..OR DUSTIN
BABA BOOEY
TIGER GIVE US A WAVE
HIT ‘EM WITH THE HEIN
DANCE 4 US PHIL
GET IN THE HOLE
TIGER V PHIL = $20
CANELO V ROCKY = FREE
HAPPY THANKSGIVING
GET DAZN FOR FREE
CANELO V ROCKY DEC 15
DAZN.COM
Posted by Blogger at 10:35 AM