Nevada Open Wraps Up its Three-Day Tournament in Mesquite 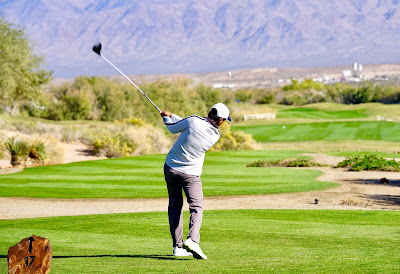 (Mesquite, Nev.) – The Nevada Open tournament hosted by Mesquite Gaming, owner of CasaBlanca Resort and Virgin River Hotel in Mesquite, Nev. came to a close today. Mark Anguiano from Whittier, Calif. claimed the top prize at 14-under-par shooting 201 for the tournament to win the first place prize of $28,000.

Anguiano started the tournament on Tuesday at the CasaBlanca Golf Club shooting a six-under-par 66 for the first round with seven birdies for the day. In the second round he kept his momentum going shooting an eight-under-par 64. His nine second round birdies vaulted him to the top of the leaderboard at the end of the second day. Anguiano held his lead throughout the third day shooting a one-under-par 71, while facing a windy CasaBlanca Golf Club.

“We had another exciting Nevada Open this year and watched some outstanding players throughout the week,” said Christian Adderson, tournament director for Mesquite Gaming. “The Nevada Open is the longest running professional golf tournament in Nevada and we’re lucky to see such competitive fields year in and year out.”

The Nevada Open ran from Tuesday, Nov. 6 through Thursday, Nov. 8. The 54-hole event featured a full field of 222 golfers and a total prize purse of $140,000. All golfers played their first two rounds at each of the award winning and scenic courses, the CasaBlanca Golf Club and the Palms Golf Club. The final round featured the top 66 golfers who made the cut after the first two rounds and was played at the CasaBlanca Golf Club.

For final round results and tournament totals, visit golfgenius.com.

For more information, visit casablancaresort.com.
Posted by Blogger at 9:39 AM