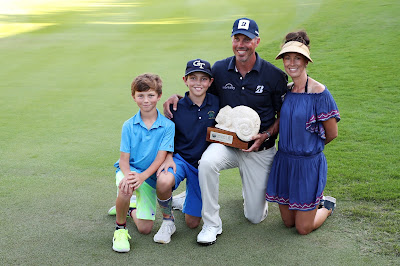 (COVINGTON, GA) – Bridgestone Golf Tour star Matt Kuchar kicked off his new season with a ‘working vacation’ he’ll remember forever. Having recently put Bridgestone’s lower spinning TOUR B X ball and new JGR Driver into play over the last two tournaments, Kuchar proved the combination to be a winning one, taking the title at the 2018 Mayakoba Golf Classic in Playa Del Carmen, Mexico, by one shot. The win south of the border was Kuchar’s first since 2014 and the eighth of his career, vaulting him into 5th place in the early season FedEx Cup point standings.

Relying on Bridgestone Golf’s TOUR B X ball and a full bag of Bridgestone clubs, the fan favorite showcased tremendous accuracy off the tee and consistent precision on his approach shots enroute to victory. In fact, Kuchar tightened his dispersion off the tee with the JGR Driver and TOUR B X ball to rank among the top 10 in driving accuracy for the week.  In addition to straighter drives, Kuchar also gained an average of 7-yards off the tee over the last two tournaments in which he used this winning combination.  Beyond his enhanced tee shot performance, Kuchar also finished in the top 10 in greens-in-regulation and birdies for the week.  On the rare occasion when he didn’t hit a green in regulation, the TOUR B X provided all the greenside feel he needed, as Kuchar got up-and-down 80% of the time, finishing in the top 5 in the scrambling category as well.

In an unforgettable week that started with Kuchar’s wife pinch-hitting at caddie for close-friend Zach Johnson when his normal bagman fell ill during Thursday’s opening round, the “Smiling Assassin” carded 4 rounds in the 60s (64-64-65-69) on the El Camaleon course for a tournament record 22-under par total.

“It is so good to get back to the winner’s circle, this one certainly feels sweet,” said Kuchar. “And that Bridgestone ball is really something.  How many wins is that for the TOUR B family in the last few months? Thanks to Bridgestone for being in my corner.  I am excited to get back to the Tournament of Champions in a few weeks.”

“Kuch has been a tremendous ambassador for the Bridgestone brand, and the game as a whole, for a very long time,” said Dan Murphy, President and CEO of Bridgestone Golf. “He has had a few near misses over the last couple seasons, so it is really great to see him close this one out and hoist another trophy.  Matt is proof positive that ball-fitting is an evolutionary process.  For most of his career he’s played a higher-spinning Tour ball, and just recently, he decided to experiment with our lower spinning model.  Clearly, the reduced spin was just what the doctor ordered this week at Mayakoba.”

The TOUR B Series golf balls represent Bridgestone’s most technologically advanced models to date. During development, company engineers used data from nearly 350,000 in-person ball fittings, combined with insights from leading third-party industry sources, to identify needs of specific player types. They then drew on more than 800 golf ball patents to determine which proprietary technologies would most benefit each type of swing characteristics identified.

For more information on Bridgestone Golf’s award-winning TOUR B family of golf balls and the entire Tour team that relies upon them, visit www.bridgestonegolf.com.
Posted by Blogger at 4:03 PM