DeChambeau and Bridgestone Come Up Aces in Vegas

(COVINGTON, GA) – Bridgestone Golf Tour star Bryson DeChambeau opened his new season in much the same fashion he closed out the last, with a scintillating one-shot victory at the Shriners Hospitals for Children Open in Las Vegas.  The win in the desert gives DeChambeau his fifth for his career (all with Bridgestone balls), and an astonishing three wins in his last five PGA TOUR starts. 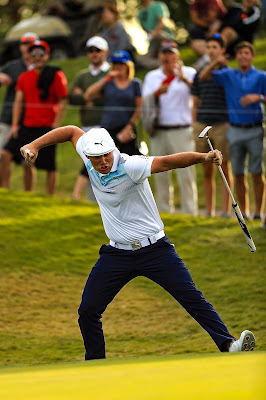 Relying on Bridgestone Golf’s TOUR B X ball, the young star exhibited pinpoint iron play and impressive driving performance in his march to victory. In fact, DeChambeau ranked among the top 10 in driving accuracy, greens-in-regulation, birdies, eagles and strokes gained: total. The win moved him to No.5 in the Official World Golf Rankings propelling him to the highest ranking of his career to date.

In a city infamous for the ups-and-downs of its visitors, DeChambeau bucked that trend, proving to be a model of consistency in firing rounds of 66-65-66-66 for a tournament total 21-under par.   Not that his performance wasn’t without gambles, including a tournament-clinching 58-foot eagle on the 16th hole of Sunday’s final round to give him the lead for good.

“After the way I finished the 2018 season, I couldn’t wait to get back out here and continue the momentum I had,” said DeChambeau. “The TOUR B X continues to be a golf ball I can count on in the biggest of moments. I can’t overstate how important it is for my confidence down-the-stretch to have a ball in play that I have previously relied on in the heat of the battle.”

“Bryson continues to wow golf fans worldwide with his intelligent and exciting play,” said Dan Murphy, President and CEO of Bridgestone Golf. “He is primed for a great year ahead and we are proud to be the ball brand he is trusting in his quest to take his game to the next level of excellence.”

The TOUR B Series golf balls represent Bridgestone’s most technologically advanced models to date. During development, company engineers used data from nearly 350,000 in-person ball fittings, combined with insights from leading third-party industry sources, to identify needs of specific player types. They then drew on more than 800 golf ball patents to determine which proprietary technologies would most benefit each type of swing characteristics identified.

For more information on Bridgestone Golf’s award-winning Tour B family of golf balls and the entire Tour team that relies upon them, visit www.bridgestonegolf.com.
Posted by Blogger at 3:31 PM