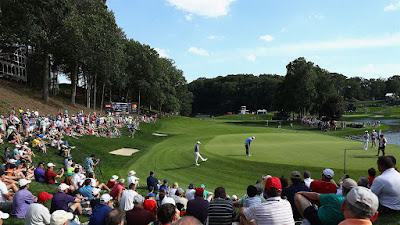 (RELEASE) - After a record-breaking week at the 117th U.S. Open, the PGA Tour has now passed the midway point in the 2016-2017 tournament schedule. The first stop as players make the turn down the homeward stretch is Cromwell, Conn., and TPC River Highlands, host of this week's Travelers Championship.

For those players who endured the demands of U.S Open competition, The Travelers will represent a much lighter lift. The par-70, 6,841-yard layout at TPC River Highlands is nearly 1,000 yards shorter than Erin Hills Golf Course, with receptive greens and plenty of birdie opportunities.

One player who knows how a thing or two about making birdies at River Highlands is Titleist Brand Ambassador Justin Thomas, who shot the lowest score in relation to par -- a 9-under-par 63 in the third round at Erin Hills -- in U.S. Open history. At last year's Travelers, Thomas orchestrated a Sunday charge for the ages. He made five straight birdies to close out his front nine and added four more on the back. He finished with an 8-under-par 62 that propelled him to a T3 finish.

"It's a fun course," Thomas said earlier this week. "I mean it sounds crazy, but I feel like every time you tee it up you have a chance to shoot in the 50s. That's fun. If you get your putter rolling and you're driving it well, you're going to have so many wedges and so many short clubs in your hands where you can make a lot a lot of birdies and you can really post a low number. I wouldn't be surprised if there were some low numbers every day."

"This is my fourth time I've played and yeah, I'm very excited about this week. I've always loved this tournament."

And as players ease back into their normal routines and set their sites on some low numbers this week at the Travelers, Titleist is once again the overwhelming golf ball choice, with 108 players trusting a Titleist Pro V1 or Pro V1x golf ball, more than six times the nearest competitor with 17 and more than all competitors combined.

Titleist was also the top choice among players in the hybrids category (30) as well as the irons category with 43 sets in play.

Vokey Design Wedges also topped the approach, sand and lob wedge (211) category and Scotty Cameron putters were the top choice among players with 62 putters in play.

- Four players who finished inside the top 10 at this year's U.S. Open are in the Travelers field this week including the co-runner-up (Pro V1) as well as Titleist Brand Ambassadors Charley Hoffman (8th/Pro V1) and Justin Thomas (T9/Pro V1x) and Titleist golf ball loyalist Trey Mullinax (T9/Pro V1x).
- Nine-time PGA TOUR champion, Titleist Brand Ambassador Jordan Spieth (Pro V1x) will make his debut at this year's Travelers Championship. Spieth is currently No. 6 in the Official World Golf Ranking and sixth in the FedExCup. The 2015 U.S. Open champion has six top-10s in 15 starts this season, including a victory at the AT&T Pebble Beach Pro-Am.
- Six of the last 11 winners of the Travelers Championship have been first-time PGA TOUR champions. Five of those players trusted a Titleist golf ball in victory, including J.J. Henry (2006/Pro V1x), Hunter Mahan (2007), the champions in 2010 (Pro V1x) and 2012 (Pro V1x) and Ken Duke (2013/Pro V1).
- Only two players have won the tournament in wire-to-wire fashion – Gene Littler in 1959 and Tim Norris in 1982.
- The best 72-hole score at the Travelers Championship is 258 held by Kenny Perry (2009/Pro V1x).
- The largest come-from-behind win is seven strokes by Titleist Brand Ambassador Brad Faxon (Pro V1x) in 2005.
- The Travelers Championship donates 100 percent of net proceeds to charity every year. Since 1952, the tournament has generated more than $36 million for charity and in 2016, the tournament generated a tournament record, $2.8 million for more than 160 charities throughout the region.
- In 2017, the primary beneficiary of the Travelers Championship will be the Hole in the Wall Gang Camp in Ashford, Conn. Founded in 1988 by Paul Newman, The Hole in the Wall Gang Camp provides “a different kind of healing” to more than 250,000 seriously ill children and family members annually – all completely free of charge. For many of these children and families, Hole in the Wall provides multiple Camp experiences throughout the year.
Posted by Blogger at 3:39 PM