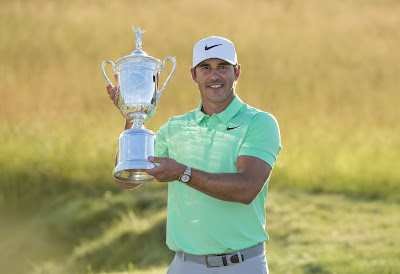 In achieving this landmark victory at the 117th U.S. Open, the 27-year-old joins an exclusive list of golfers to have won the prestigious Major championship. Originating in 1895, the tournament has been won by the game’s undisputed greats, and fellow Rolex Testimonees including Arnold Palmer, Jack Nicklaus and Gary Player, otherwise known as golf’s “Big Three”.

The most recent Rolex Testimonees to have tasted U.S. Open victory include South African Retief Goosen and Tiger Woods, who claimed three U.S. Open titles between them, as well Martin Kaymer and Jordan Spieth, whose successes came in 2014 and 2015, respectively.

A CHAMPION’S PERFORMANCE
Commencing the final day’s play 11-under-par alongside fellow Testimonee Justin Thomas, one shot behind the leader, Koepka made a fast start with birdies on the first and second holes, before holing a 30-foot putt on the eighth, to move to -14 and claim the outright lead.

After the turn, following a dropped shot on the challenging tenth hole Koepka showed his class and calmness under pressure by scoring three birdies in a row on holes 14, 15 and 16, moving to a total of 16-under-par – equalling the U.S. Open low-scoring record – and extending his lead to four.

Following his final round, Brooks Koepka, said: “It feels amazing to get my name on this trophy with so many other great names. It’s truly an honour.

“It hasn’t even sunk in but I think it will be special. I want to see my family and be with them, and to spend time with everyone who’s played a part in helping me win this.”

The American who has won on both the European Tour and PGA TOUR, and is taught by Rolex Testimonee and celebrated golf coach Claude Harmon III, was crowned the 117th U.S. Open Champion. There were many other notable performances by the Rolex New Guard – a new generation of golfers who want to assert their authority on the sport, and inspire future generations of players to follow them.

Speaking about his peers, and fellow Rolex Testimonees, including Rickie Fowler, Hideki Matsuyama and Justin Thomas, Koepka said: “Those guys are going to win lots of Majors, they’re going to win multiple times, and have unbelievable careers. I think the younger generation that’s coming up right now is really impressive, if you look at the top of the leaderboard, it’s so impressive, and it’s getting that much harder to win.”

ROLEX NEW GUARD
Following rounds of 74, 65 and 71, 25-year-old Hideki Matsuyama of Japan shot a rallying final round of 66 – the lowest round of the day – to finish tied for second place.

In the third round, 24-year-old Justin Thomas from Kentucky, USA, scored 63 – equalling the lowest ever round scored in a U.S. Open, and setting a new Championship record for the lowest ever score in-relation-to-par at nine-under. With a final total of eight under par, Thomas finished tied in eighth place.

The 28-year-old Rolex Testimonee Rickie Fowler, from California, USA, led the tournament after the first round, having matched the U.S. Open scoring record to par for the opening round with a 7-under 65. Threatening the leaderboard for the duration of the Championship, Fowler finished with a solid level-par round to tie for fifth place.

Rolex Director of Communication & Image, Arnaud Boetsch, said: “Rolex would like to congratulate Brooks Koepka on his outstanding first victory in the prestigious U.S. Open Championship.

“Koepka has been part of the Rolex family since 2015 and this exceptional achievement reflects his steadfast commitment to excellence and superior performance.”