Drive for show and putt for dough. A catchy saying, for sure, but also very true. No amount of 300-yard drives will save your score if you can’t find the bottom of the cup once on the green. 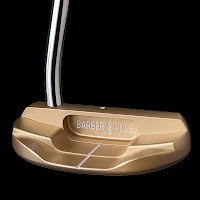 It’s May. Golfers across the country have had an opportunity to knock the rust off their games after a long, cold winter. While it’s socially acceptable to blame a couple rounds of bad putting on lack of play or bumpy greens that are waking from months of hibernating, by June you’re going to have to turn your ire toward equipment (as opposed to admitting user error).

Bottom line: You need a putter - enter Barber Pole (www.barberpolegolf.com). According to the company, their patented putters are designed to stroke the golf ball above the equator, which produces immediate top-spin and a true, forward role for improved control and accuracy. By combining the natural properties of C360 Solid Brass with Radius Face technology (RFT), the ball resists skidding and starts on its path with a more-true roll.

For the purpose of a hands-on review, American Golfer took to the course with Barber Pole’s Ballybunion putter. According to the head professional, the greens were running between 11 and 12 and were two weeks past aerification - making for ideal conditions. 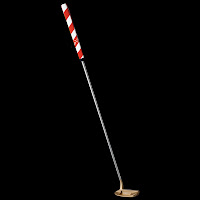 Aesthetics: Purely based on looks, the brass head and striking red-and-white striped grip make the Ballybunion stand out in a crowd. The white dot and line running perpendicular to the putter’s face is a terrific alignment aid, while the tapered structure provides a hybrid look, if you will, pleasing both camps - whether you prefer a blade or a mallet.

Feel: Mallets have been gaining popularity, but one complaint often heard has to do with weight. The larger head tends to make them heavier, which can prove to be problematic on fast, slick greens. Barber Pole strikes a nice balance with the Ballybunion - not too heavy and not too light. The result is a nice pendulum feel. It’s offered in your choice of multiple lengths, too (33-36 inches), allowing for greater customization.

Test: While Quintic, an independent testing center, provides scientific evidence that Barber Pole putters achieve a “true roll” in nine inches, which is three inches better than the competition, we’re not scientists. We’re (flawed) golfers. Our unscientific tests were three-fold. First, 10 putts from five feet in a circle around the hole. We expanded that to 10 feet and then 20 feet to get a feel from a variety of distances. We freely accept user error and fully expect to miss our share of putts regardless of putter, but from five and 10 feet, we made more than we missed. And from 20 feet, we sank a few, but more importantly, we didn’t three-putt once.

Consider the number of putts missed within five feet. Most probably lipped out or burned the lip. This is where Barber Pole’s true roll is invaluable. You can skid for an extra three inches or start on your needed line that much sooner. The choice is yours, but being on line is obviously better.

Perhaps we were a little dense heading into the test, but we were thinking line, line, line as the benefit of RFT. Stepping out to 20 feet, we were quickly impressed with Barber Pole’s distance control. Uncontrolled back spin - be it with a putter or short iron - is the enemy of distance control. The Ballybunion not only stayed on its line, but also cozied up to the hole time after time. Remember, no three putts!

Putting guru Dave Pelz says that putting makes up more than 40 percent of your score. Why trust such a vital part of the game to anything less than the best? It’s simple: Starting the ball on a true roll sooner will lead to making more putts and Barber Pole putters achieve that true roll faster than the competition.