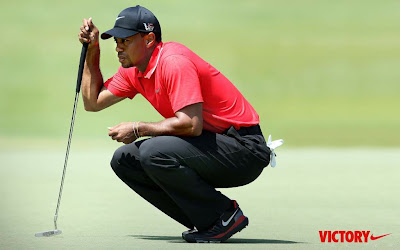 As he held off the field to capture his 78th career PGA Tour victory, Woods took full advantage of his 14 Nike clubs and the new Nike TW’14 footwear, which he debuted in the practice round on Tuesday.

The Nike TW’14 footwear takes last year’s TW’13 to a new level of innovation, further enhancing the fit, feel and function. This footwear features a natural motion engineered outsole that allows Woods to keep contact with the ground longer, better harnessing the energy of the foot to the shoe and, therefore, the shoe to the ground.

The new upper features improved ventilation that delivers increased breathability and comfort. This was achieved through strategic perforations and a more comfortable mesh tongue which provides Woods the ventilation he wants without compromising the waterproof protection he needs.

Woods wanted more stability with mobility, accomplished by using Nike's Dynamic Flywire technology which moves with him and stabilizes his foot when he swings.

On a tight course with even tighter driver landing areas, Woods’ VR_S Covert 3 and 5 fairway woods were keys to his victory. The VR_S Covert features high speed cavity back technology, moving weight to the perimeter to increase forgiveness and add even more distance to off-center shots.

First in par-5 scoring for the week, distance and control were imperative to his win. “It was going so far out there," said Woods. "Like on 18, I had 200 yards to the hole, and I hit a little 8-iron in there and it flew flag high. 3-woods were going over 300 yards. My 5-wood was getting out there near 300.”

Woods continues to be the #1 putter on Tour with Method technology proving instrumental in his last seven PGA Tour wins for the Swoosh. The Nike Method franchise features Nike’s polymetal groove technology, generating a faster forward roll at impact for increased accuracy and less skid.