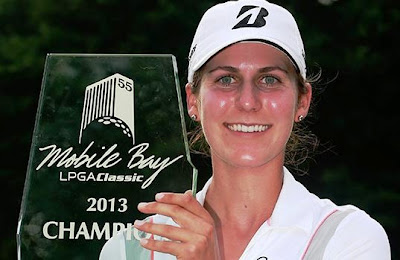 Johnson’s maiden victory came in thrilling fashion, birdieing 4 of the last 6 holes for a one-shot victory.  With the win, Johnson earned $180,000 and vaulted into 14th place on the 2013 LPGA Official Money List.

In her victory, Johnson relied on Bridgestone’s TOUR B330-RX golf ball and J40 clubs.  Below is an official rundown of what was in her bag.

With the victory, 3 of Bridgestone’s 4 premium B330 family ball models have won on Tour in 2013.  The Tour B330 gained a win with Brandt Snedeker’s victory at Pebble Beach and the Tour B330-S gained a win with Matt Kuchar’s victory at the WGC Accenture Match Play Championship.  Bridgestone now has more premium golf ball models that have won on Tour this year than any other company.

“Jennifer is a tremendous player with a ton of talent, and we knew it was just a matter of time until she found herself in the winner’s circle,” said Dan Murphy, Executive Vice President of Sales and Marketing – Bridgestone Golf, Inc.  “We congratulate Jennifer on a great first win, and we’re excited to watch her build upon this momentum going forward.”