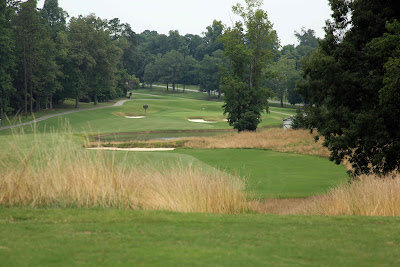 (RALEIGH, N.C.) — In Augusta, the azaleas are in full bloom. Around the Carolinas, McConnell Golf is ready for another season hosting top-tier championships.

On April 26-28 a few of the recent high school invitational participants will don their new school colors when Old North State Club at Badin Lake hosts the ACC Men’s Golf Championship. A week prior, the ACC women’s tournament field gets its first shot at the newly converted Bermuda grass greens at Sedgefield Country Club’s Ross Course in Greensboro. Old North State served as host site for the ACC Women’s Golf Championship in the early 1990s and the league was so impressed it awarded the men’s golf championship to Old North State — where it has been held ever since.

The Web.com Tour’s Rex Hospital Open in Raleigh will be contested June 20-23 – a few weeks later than normal – at TPC at Wakefield Plantation, which opened in July 2000 and began hosting the event a year later. Another McConnell Golf property, Raleigh Country Club, served as the event site for three years starting in 1998, back when the Web.com was known as the Nike Tour.

Of course, once again, in August — after warming up with the best golfers this side of the PGA Tour — McConnell Golf welcomes the world’s finest August 15-18 during the Wyndham Championship at Sedgefield Country Club’s Ross Course. The Wyndham field is expected to be better than ever, as the Wyndham now stands as the final regular event of the 2013 season, meaning future Tour cards will be on the line, along with a spot in the lucrative FedEx Cup.

Two months earlier from June 11-14, Sedgefield’s Ross Course entertains the game’s top junior players with the winner of the AJGA FootJoy Invitational earning a sponsor’s exemption into The Wyndham. Then on July 15, it hosts the Club Car CPGA Pro-Official Championship.

Not to be outdone this summer, Musgrove Mill Golf Club in Clinton, S.C., provides a stern test for the 41st South Carolina Amateur Match Play Championship June 12-16. The Cardinal Amateur (three weeks earlier than normal from July 19-21) at Sedgefield’s Dye Course in Greensboro is one of the nation’s most coveted amateur events with a storied history of matching some of the world’s top players in a competitive but fun environment.

McConnell Golf is an organization dedicated to delivering quality golf and amenities to its members, and having strategically located courses throughout the Carolinas is a big part of the overall plan that brings exceptional value to 3,000-plus members. The traditions and values it brings to all, and to every skill level, are a testament to the caliber of people that welcome its courses for pleasure and competition.