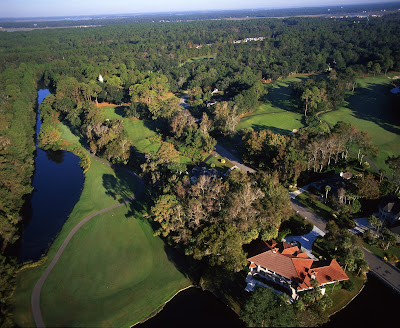 Augusta native and longtime TOUR favorite Charles Howell III headlines Heritage week events at Palmetto Dunes, appearing Tuesday for a signing on behalf of Dunning Golf at the resort’s Robert Trent Jones Pro Shop. There will also be club fittings and demo days by TaylorMade, Nike and Ping, while the Ecco Tech Van will be on site Thursday displaying the newest brands of golf shoes.

“It’s an electric week around here,” said Clark Sinclair, director of golf at Palmetto Dunes. “Our guests and residents are constantly coming and going back and forth to the [RBC Heritage]. The tournament helps create an exciting buzz throughout the resort.”

It is a synergy that dates back to the mid-1960s, when a group of physicians and executives from Greenwood, S.C., entered into an innovative business venture with Charles Fraser. For $1,000 an acre, the group bought a 2,000-acre mid-island property that would become Palmetto Dunes Oceanfront Resort.

Today, while the RBC Heritage wraps up play overlooking Calibogue Sound, Palmetto Dunes offers its golfers an equally memorable view of the Atlantic Ocean on the resort’s famed Robert Trent Jones Course. In fact, some of the world’s best golfers who have appeared at the RBC Heritage through the years — including Tiger Woods and Phil Mickelson — first cut their teeth on Lowcountry golf at Palmetto Dunes during their amateur days, competing in the longtime collegiate tournament contested on the resort’s Arthur Hills Course.

RBC Heritage spectators hoping to also play golf while they are on the island can enjoy a break from the heat on any of Palmetto Dunes’ trio of highly acclaimed courses designed by some of the world’s best architects. Golfers at the Arthur Hills, Robert Trent Jones and George Fazio courses have the option to ride in air-conditioned comfort with the Coolwell G2 Climate Control System, which keep Palmetto Dunes golfers cool from the first to tee to the 19th hole.

Designed to mount on a golf cart, the G2 unit is a compact air cooler and, with the flick of a switch, a heater — making it ideal for South Carolina’s hot summers and cool winters. It also features a built-in beverage cooler compartment that keeps drinks cool and will even cool down warm drinks. For extreme needs, a Blast button allows players to control a quick, high-velocity stream of air — either in cooling or heating mode — when the user is outside of the cart.

Meanwhile, those seeking a break from the tournament traffic on the south end of Hilton Head Island can enjoy Palmetto Dunes Oceanfront Resort’s wide variety of luxurious, mid-island accommodations from which to choose. Needing resort activities other than golf? The resort also features an award-winning tennis center, an 11-mile inland salt-water lagoon system for kayaking and fishing, and Hilton Head Outfitters for bike rentals, canoes, kayaks, fishing and much more. The Mediterranean-style Shelter Cove Harbour deep-water marina, located right across from Palmetto Dunes, features waterfront shopping and dining and a wide variety of charters, including nature cruises, dolphin tours, sport crabbing and fishing.

Finally, a little history: While the RBC Heritage is known for its candy-cane striped lighthouse that overlooks its 18th green, Palmetto Dunes Oceanfront Resort boasts a renowned lighthouse of its own. The Hilton Head Lighthouse in the Leamington neighborhood on the Arthur Hills Course was built in 1881 and put to use in 1884.

In August 1898, the lighthouse keeper, a man named Adam Fripp, died of a heart attack while trying to sustain the light. Right before he passed away, Fripp urged his 21-year-old daughter, Caroline, to keep the light burning, but she died three weeks later. Since her passing, it has been reported that a girl (who wears her blue dress), known as “The Blue Lady” has been seen in one of the lighthouse windows or at the foot of the lighthouse on wild, stormy nights.

Suffice to say this week, while golf fans around the world are thinking about beautiful Hilton Head Island and its rich heritage in the game, they should think no further than Palmetto Dunes Oceanfront Resort.