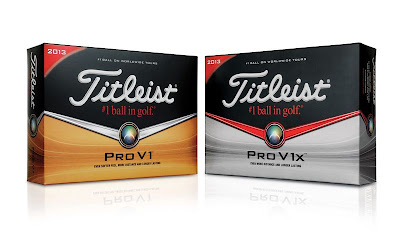 In a world where we’re inundated with advertisements boasting “new and improved” products, we’ve become a bit skeptical. For one, new doesn’t always mean improved (does anyone remember New Coke vs. Old Coke?).

So when Titleist introduced the 2013 versions of the Pro V1 and Pro V1x, we were very curious as to what’s changed.

New Pro V1 provides:
• Even softer feel – This is the the softest, best-feeling Pro V1 we've ever made, due to a softer ZG core process technology that produces a softer compression.
• More distance – Due to lower, more controlled flight with lower driver and long iron spin that results in a shallower angle of descent that produces more roll. (Also a result of softer ZG core process.)
• Longer lasting durability – New cover formulation and paint system increases the durability by making the ball look whiter and brighter throughout the course of play. (Also contributes to more consistent flight.)

It’s hard to argue with science and the exacting details created by machines that strike each ball during tests the same way. We’ll take Titleist’s word on the test results. Distance and flighting are concrete.

But we’re not machines. We’re (very) fallible. So American Golfer took each out for tests of our own.

Before getting to the playability, let’s start with the aesthetics. It may be a superficial concern, but we never cared for the yellowing or dulling of past Pro V1s. It was always the best ball played, but after some time in play, it looked old and dated - like a ball pulled from a pond. Out of the box, the new paint scheme is bright white. Take away a few scuffs from normal wear and tear and the 2013 still looked terrific after 36 holes.

Admittedly non-scientific, but we put the new version next to a used ProV1 from last season. Can’t say how many holes we played with last year’s, but we know it wasn’t compromised by prolonged exposure to the sun or fished from a pond. The side-by-side “look test” confirmed Titleist’s cover formulation.

Off the tee, it is hard for a mid-handicapper (8) to judge a ball’s flight and distance. The Pro V1 and Pro V1x (whatever year) are premium balls and certainly perform better than balls below their category. We put two mid-range balls into the test and both lagged behind in distance and accuracy. Simple: If you want distance and accuracy, put a Pro V1 or Pro V1x in your bag.

Similarly, approach shots between 100-175 yards were a push, with a slight advantage going to 2013 over 2012. Those mid-range balls both came up short of the Pro V1 and Pro V1x. Being able to hit an 8-iron instead of a 7-iron is going to increase accuracy. Knowing that 8-iron will carry the menacing pond in front of the green is priceless.

If you’re keeping score, to this point 2013 topped 2012 in aesthetics and durability, while off the tee and into the green were a push (with slight edge going to 2013).

With that said, we noticed the most improvement around the greens. Surprising, because 2012 was head and shoulders above than any other ball - premium included - already. Soft is an understatement. The 2013 version feels like it is part of the club. It only took a couple chips and/or pitches before you expected it to nestle in close to the hole or even go in!

We can’t say anything bad about the 2012 Pro V1 or Pro V1x. We can, however, say the 2013 versions are even better. Hard to think it’s possible to improve on the best, but Titleist did.

Bottom line: You get what you pay for with golf balls ... and with Titleist, you get the best.