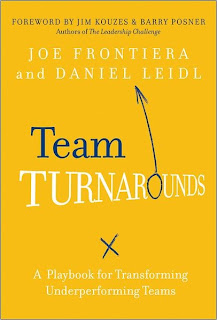 Below is an excerpt from Team Turnarounds by Joe Frontiera & Daniel Leidl. Many of you already know the men behind the SeeMore Putter Company. This excerpt gives you a greater perspective on the type of people who are behind you. Both Jim Grundberg and Jason Pouliot have had an extensive background in the golf business. By purchasing SeeMore in October 2006, they wanted to do something different in the golf business.

The book also features the state of Michigan, the Philadelphia Eagles and the Indianapolis Colts among other great turnarounds.

In addition to articulating a clear and inspiring vision, leaders guiding teams through stage II need to answer questions about how advancements will be made.  At this stage of the process, guiding values provide need structure for how the group will work to move forward.  People are stirred by values, and they want to invest in organizations that share their ideas.  As the leader, your determining of team values and making them explicit motivates those around you.  You have to make it clear that the group stands for something, whether it’s customer service, effort, innovation, or something else entirely. When you do that, the shared commitment will motivate specific actions by providing a framework for what’s important, what’s expected, and what’s needed to see that the larger vision is achieved.

In September 2006, when Jim Grundberg and Jason Pouliot purchased SeeMore Putters, the company had essentially flatlined, with no sales or distribution.  As they prepared for the relaunch of SeeMore Putters, the duo had a clear vision of creating “the greatest brand in golf” but needed clear values to guide the way.  Building up to the launch, they identified just how they wanted SeeMore Putters to become a premier brand. Grundberg explains, “If we provide great customer service, a technology that we already know is validated, and create some new and exciting product designs, we felt like this thing could end up being a great brand.” In other words, the vision wasn’t enough to get them where they wanted to go; they also had to define just how they would try to get there.  Grundberg and Pouliot placed emphasis on getting behind the exciting and unknown technology at SeeMore Putters, but, more important, they also dedicated themselves to providing great customer service and creating innovative designs.  They set their values around customer care and cutting-edge product development, and with these guiding principles they began their lifesaving operation on an all-but-lifeless brand.

Seven years earlier, SeeMore Putters could have become a brand on the rise.  Payne Stewart had just won the U.S. Open with one of the most spectacular putting performances in the history of the event--and did it with a SeeMore putter in hand.  The brand instantly gained international visibility.  Sadly, however, four months after winning the U.S. Open, Stewart died in a plane crash on October 25, 1999, and golf lost the player many considered one of the kindest and best-hearted of all time.  The golfing community mourned—and SeeMore Putters faded from view. As Grundberg notes, “With the tragic accident, losing Payne at the end of 1999, the brand sort of disappeared off the radar screen.  It kind of came and went really quickly.” The brand was then sold to some investors who had limited visibility and involvement in golf, and SeeMore Putters was effectively shelved.

SeeMore Putters was a brand that had never had much of a life, but when Grundberg and Pouliot stepped in, it was a good match from the start. Not only did SeeMore Putters offer a unique product that the partners believed they could leverage, Grundberg and Pouliot also had previous experience on a team that had taken another brand in the same industry from nearly nothing to something.  Earlier in their careers, they had been colleagues at Odyssey, a brand focused on the design and development of golf putters.  The team at Odyssey grew the brand, then unknown, to a number-one market share, creating one of the biggest success stories in the history of the putter industry.  With that experience, and with SeeMore Putters’ unique history and technology, Grundberg and Pouliot were confident about their chances.

Because Grundberg and Pouliot had put such intense focus on the two distinct values of customer service and technology, they wanted to attract new customers as well as customers who had experience with SeeMore Putters.  To accomplish this goal, they offered new and inventive products along with unparalleled accessibility and fervent focus on customer care.  Their attention to these values can be seen throughout the organization, and it touches everything from product delivery to customer relations…

This commitment to customer service extends far beyond purchasing convenience.  In a world dominated by voice recordings and phone trees, SeeMore Putters is dedicated to being different by being accessible and accommodating.  As Grundberg explains, “That’s been the number one part of our whole value chain—customer attention.  A meeting will never interfere with taking a call from customers or taking an e-mail, and it’s almost a 24/7 immediate response.”  It’s a commitment to serving the people interested in the product and willing to invest in the brand.  Grundberg makes this clear when he says, “If you need a putting lesson on Saturday afternoon over the phone, give us a call.  We’ll give it to you.”  For Grundberg and company, to spend a Saturday giving a putting lesson to a customer is worth the time. Giving back to the people committed to the brand is not simply good advertising.  It’s what the people at SeeMore Putters value.

In addition to customer service, SeeMore Putters is equally committed to the development and innovation of putter technology.  In 2010, Bloomberg Businessweek described the small company’s $1.5 million in sales as a function of an inventive and diverse product line that caters to both high-end needs and to more modest ones.  And even though SeeMore Putters has diversified, with innovative products that serve a variety of needs, the company is adamant about not innovating for innovation’s sake.  Grundberg notes, “It’s important to keep up with good technologies from a marketing perspective, but when you start changing technologies just for the sake of change, we jump from authentic product development to just a world of consumer marketing.”  In other words, SeeMore Putters values technological advancement and product development, but not at the expense of customers’ expectations and needs.  The focus is on innovating where innovation is needed, on creating a genuine benefit for the customer, and on developing new technologies that serve a functional purpose.

At SeeMore Putters, this commitment to the specific values of customer service and innovative technology has paid continual dividends.  In the two years (2005-2006) before Grundberg and Pouliot acquired the company, SeeMore Putters had less than $50,000 in total revenue and sold its products in five countries.  Between 2007 and 2011, the company experienced at least 30 percent annual growth, brought in $8 million in total revenue, and shipped its putters to more than forty countries.

Along the way, Grundberg and Pouliot and their team have managed to stay true to themselves.  Although the SeeMore team is small—only about ten people—the team’s values are intact.  Given this type of focus, it’s no wonder that SeeMore Putters is experiencing success.  With the vision of creating “the greatest brand in golf,” SeeMore Putters set the bar high, but with a strong commitment to clear values, Grundberg and Pouliot and their colleagues are making headway as a recognizable, reliable, likable brand.