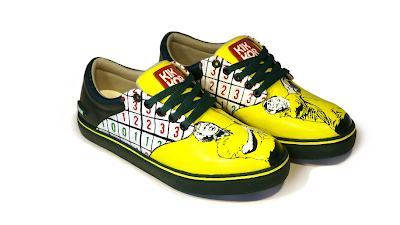 (Vancouver, Canada) – The Limited Edition Kikkor Masterer pair of golf shoes, hand painted by Social Statement, recently auctioned for a final price of $1,025 to the winner, Ross Sheard. One-hundred percent of the proceeds were donated to Canucks for Kids Fund, Sheard’s charity of choice.

It is perhaps the most epic golf shoe Kikkor has ever made, maybe even the most epic golf shoe ever made. The Limited Edition Kikkor Masterer was hand painted by Social Statement, featuring two of golf’s most notable Masterers, Jack and Arnie, along with the unmistakable Masters Leaderboard, and unique Kikkor-Masterer branding. The was only one pair made, but most notable, 100% of the sale went to the charity of the buyer’s choice.

“We wanted to create something that was exceptionally unique to the Masters, rather than a simple pair of green and yellow shoes,” explains Kikkor Founder, James Lepp. “In my mind, there’s nothing much more unique than a hand-painted pair with 100% of the proceeds going to charity.”

The Kikkor Masterer shoes were auctioned off on eBay, ending on April 17th, with Ross Sheard winning the bid at $1,025. Sheard describes his rationale behind the bid, “I decided to bid on the shoe first and foremost because I knew the money was going to a good cause, whether I won it or not. Secondly, the shoes are the most unique golf thing I have ever seen, and instantly had visions of what they would look like in an encasing of some sort for years to come.”

When asked why he selected the Canucks for Kids Fund as the charity, Sheard responded, “The Canucks for Kids Fund represents everything you'd like in a charity. It dedicates itself to providing support for children's health and wellness, they help develop for grassroots hockey, and heavily promote and encourage education in our wonderful province of BC. As a former junior hockey player, I personally know how much it costs to support your love for the game, and anything to help the kids out is fantastic. Not to mention, I am a Canucks fan through and through.”

Shane, the artist behind the Kikkor Masterer and Social Statement, stated, “I am honored Kikkor Golf reached out to me on this project knowing the proceeds would benefit such a worthy cause. Art and charity work in harmony. They are both mediums that transcend language, ethnicity and culture. To know my talents can bring people together for a worthy cause is humbling.” Talks between Kikkor Golf and Shane have already begun regarding other one-of-a-kind shoes.

To conclude, Lepp from Kikkor Golf explains, “At the end of the day we couldn’t be more pleased with how things turned out. The Kikkor Masterer pair looks stunning, the winning bid exceeded our expectations, and the chosen charity of Canucks for Kids Fund is close to our hearts.”