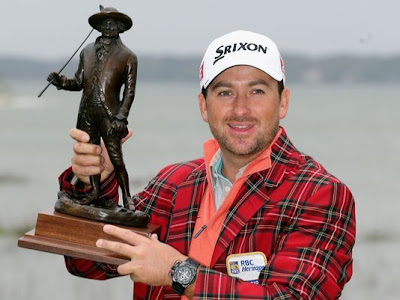 (HUNTINGTON BEACH, CA) – Cleveland Golf/Srixon congratulates staffer Graeme McDowell for his victory at the 2013 RBC Heritage held at Harbour Town Golf Links.  Despite difficult conditions yesterday on Hilton Head Island, in South Carolina, McDowell held on to win the tournament in a one-hole playoff.  Battling swirling winds and a four-shot deficit to start Sunday’s round, McDowell rallied to take a one-shot lead into the 72nd hole.  McDowell’s only bogey of the day came on the final hole of regulation, forcing a sudden death playoff.  On the first hole of the playoff, he struck his approach to within 15 feet and two-putted for par and his second career victory on the PGA Tour.

“This game kicks more often than it gives you a pat on the back,” said McDowell.  "It’s hard to win. I guess the weather was what the doctor ordered. I needed that to get close to the leaders."

McDowell, from Northern Ireland, shot a final round 69, one of only three scores in the 60s among the 70 who teed off Sunday, to finish at nine-under par (275).  McDowell’s victory is largely due to his ability to scramble around the greens.  He finished No. 1 in scrambling for the event, making Par or better on 19 of 24 missed greens (79.17%), and maintained his position as the No.1 Scrambler on the PGA Tour in 2013.

In addition to his impressive scrambling statistics, McDowell also ranked inside the Top 10 this week Driving Accuracy (T5), Strokes Gained Putting (6th) and Greens in Regulation (T7).  This win also propelled McDowell back into the Top 10 of the Official World Golf Rankings (8th).