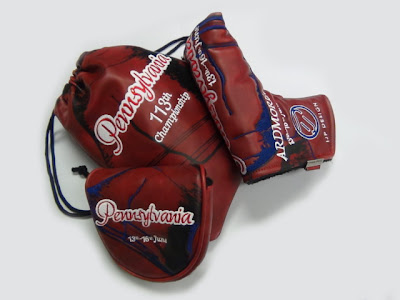 As golf fans across the world make preparations for June’s 113th championship taking place at the internationally renowned course in Ardmore, Pennsylvania, IJP Design is launching its second in a series of four 2013 limited edition putter covers to mark each of the majors. 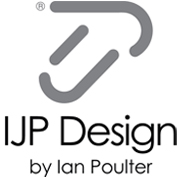 All pins on the historic course are topped with red wicker baskets instead of the usual flags and have been used since the course opened in 1910. The iconic red is featured on the putter cover design using rustic leatherette material to create a vintage look and feel. The liberty bell, an iconic symbol of American independence located in Pennsylvania, is printed in navy blue and the mix of red, blue and white represent the American and UK national colours.

The putter cover, along with the rest in the series, represents Ian Poulter’s iconic style with striking colours and eye-catching designs. Just 600 limited edition putter covers have been produced, 350 in blade and 250 in mallet and each one individually numbered on a limited edition tag.

The limited edition cover is made from PU/leatherette with soft fleecy lining and includes an IJP Design ball marker in gun metal and white enamel. It comes in its own protective, lined tote bag, which can be used for holding spare golf balls, tees and other accessories. Golfers wishing to pre-order a limited edition cover can do so from 13th May 2013 at $69.95 from the US online store at www.ijpusa.com for delivery in time for the tournament and within plenty of time for Father’s Day on Sunday 13th June.

Mark Truby, Managing Director at IJP Design said, “The first in the series of the 2013 series of limited edition covers was a huge success and we’re confident the second design will be well received too, giving golf fans the opportunity to commemorate these great tournaments. The red wicker baskets and liberty bell are iconic symbols captured in the design along with a bold palate and distinctive style synonymous with Ian.”