More at the 'Four' 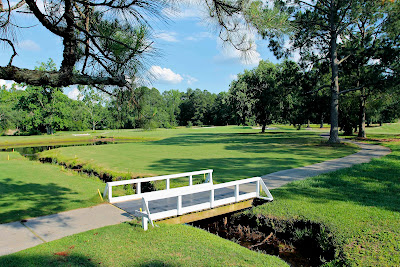 (FAYETTEVILLE, N.C.) – Readiness is non-negotiable in this All-America city.

Naturally, maintaining readiness is paramount for the army of soldiers who make Fort Bragg — located in the northwest portion of Fayetteville — its home. But like the military, golf in the North Carolina Sandhills has to be formalized. It has to be organized. Most of all, it has to be modernized ... continually.

Demonstrating its ongoing commitment to its members – and to some outside individual and package play of late – Gates Four completed a multi-million-dollar, 29,000-square-foot clubhouse in 2001 that has grown into a wonderful focal point for the facility and the surrounding gated community. Also in the early part of the century, esteemed designer Dan Maples was called on to etch his imprint into the original Willard Byrd-designed course, which included reversing its two nines so that players could conclude their rounds with a wonderful view of the grand clubhouse.

Gates Four is now taking its next step up the ladder with its most recent capital-improvement project that includes a new 3,600 square-foot Golf Pavilion, a 10-acre park and new tennis courts. This, along with an even more recent golf course renovation by architect Kris Spence — who brought all the greens back to USGA specifications using A1/A4 bent grass as well as an entire bunker renovation, improved practice area, chipping green and the addition of several new tees — brings the total investment made to the club over the last two years to an excess of another $1.5 million.

That’s readiness that meets even this town’s most stringent standards.

“Our biggest purpose in building [the new golf pavilion] is to promote our golf tournaments and have a venue for players to go after events,” said Gates Four general manager Kevin Lavertu. “[Previously] they had to go to our main ballroom, which is for more formal events.”

The fresh 3,600 square-foot golf pavilion includes seating for over 200 people and is equipped with a modern flat-screen television, a fireplace and a full surround-sound system. Seating is available both inside and outside the pavilion, making it ideal for hosting member functions, cookouts, golf tournaments or even special events like weddings.

On the racquet side of the country club scene, two USTA hard-surface tennis courts have been added. This pair, along with a complete renovation of its two original courts, will give Gates Four a total of four new U.S. Open-modeled color tennis courts, enabling the club to host league play, expand its lesson programs, its junior tennis programs and make it more comparable to most other clubs in the area.

The new park, known as “Little Rockfish,” will serve as an extension of the club and is for members only. It includes a tots area, baby swings, open areas, volleyball courts, tire swings, a lengthy nature/fitness trail and much more.

All together, the golf course renovation and the new property amenities add up to a very extensive, yet vital, upgrade to the Gates Four semi-private experience.

“People look at Gates Four as a premium facility,” added Lavertu. “We’re doing everything first class and there’s no question that it is going to be better than ever.”

The club will host its latest landmark weekend event on Saturday and Sunday, April 27-28, to debut both Little Rockfish Park and the Golf Pavilion.

The new park will open on Saturday, April 27 at 12 noon followed by a cookout for all Members and Guests. On Sunday, April 28 the pavilion will open with a celebration from 4-6 pm featuring entertainment, beer, wine and heavy hors d’oeuvres.

Both events are open houses and provide a great opportunity to showcase the club to family, friends, neighbors and co-workers to display the many advantages of being a member at Gates Four Golf and Country Club.

Gates Four at the Fore

Gates Four Golf and Country Club was established in 1967 and has grown into one of Cumberland County’s premier facilities. The club features 18 holes of championship golf, a 28,000 square-foot, full-service clubhouse, tennis courts and a swimming pool. It is located within the 24-hour gated community of Gates Four, which currently nurtures nearly 700 homes and 300 lots which are still undeveloped.

Seven ponds or lakes punctuate the golf course at Gates Four. A clear-running stream also winds its way across the classical layout. The challenge begins with a few lower-lying holes before it begins to climb in elevation in the middle and again at the end. The Willard Byrd routing is a wonderful walker’s venue, befitting its country club appeal.

Gates Four is a semi-private facility owned and operated by the Riddle Family of Fayetteville. www.GatesFour.com or 910-425-6667.

Fayetteville golf packages at Gates Four and other courses are available at www.MaplesGolf.com or 800-889-5323. Additional info at www.VisitFayettevilleNC.com/golf.