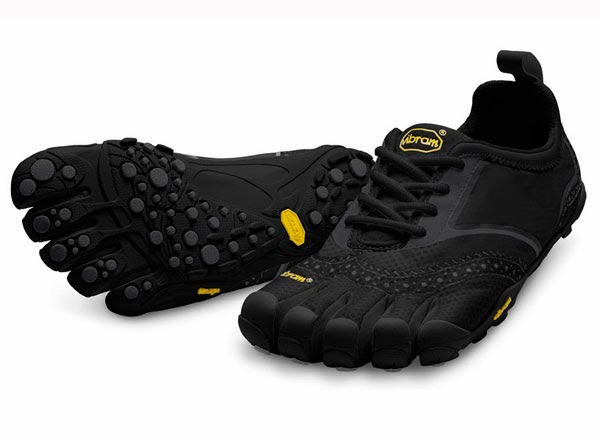 I first became aware of the minimalist running movement about five years ago. While I knew of barefoot runner Zola Budd in the 1980s and saw a feature on a tribe of Indians from Mexico who ran sans footwear, I wasn’t sure how a “barely-there” running shoe would be better than its traditional, structured counterpart. After all, the constant heel-to-toe pounding - especially on pavement - would be too hard on my knees and back, I believed. With this, I never tried a minimalist running shoe.

Fast forward to a few weeks ago when I came across the same concept - minimalism - in a golf shoe. Considering how large a role feel plays in the game, actually being able to more-closely contact the playing surface could be a nice advantage. American Golfer took the bait.

Where did we start? At the forefront of the movement, of course ... Vibram, who introduced the world to its “foot glove” in 2005.

First things, first ... Appearance. This is not your father’s golf shoe. Heck, it’s most likely not your big brother’s golf shoe. Free your mind of all preconceived notions. The V-Classic from Vibram FiveFingers looks more like a gorilla’s foot, than a golf shoe.

Initially, trying them on can be a challenge, though Vibram does offer a how-to recommendation inside the box. Because the V-Classic shares similarities with a glove, it is suggested that you slip the big toe in first, then work your way toward the pinkie toe, working each one into it’s designated “pocket.”

Do not attempt to walk 18 holes the first time you’re in these shoes. There’s a transition period. While you may be familiar with breaking in a new shoe, this is more about allowing your foot - and body - to get comfortable with the V-Classic. You’ll be using muscles you’re not used to using while playing golf.

Vibram suggests easing yourself into their product. Start by wearing them around the house or office - maybe a half hour to an hour at a time. Perhaps you can take them to the driving range a couple times, too, before venturing on the course. As always, listen to your body. It will tell you if you need to scale back or when it’s time to take another step.

As you probably assume, these are spike-less shoes. Rubber lugs on the toes, forefoot and heel assist with traction and provide enhanced stability. Had we not experienced a spike-less revolution in recent years, this may have been another hurdle to clear.

Those who still prefer spikes - metal or plastic - will certainly find it difficult to accept the V-Classic’s traction system. I’ve made the transition - at least while walking - to a spike-less golf shoe, so Vibram has my attention.

Makers of traditional, structured golf shoes have been working diligently on creating a more flexible, lighter-weight product. Vibram FiveFingers has beaten them to the punch with the V-Classic - the ultimate minimalist golf shoe.