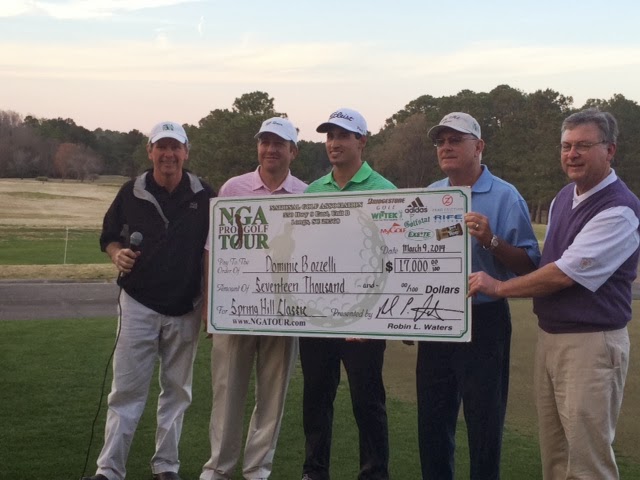 (Tifton, Ga.) – Being a rookie on the NGA Tour is usually an eye opening experience. It’s the first time a lot of players, especially those straight out of college, find themselves having to be self-sufficient, planning their own travel, making practice arrangements, heck, just figuring out when and where to do their laundry while they are living life on the road. For most rookies it’s their golf game that can suffer as they learn to manage their new found  “professional” careers. So far, for the 2014 season, that hasn’t seemed to be the case as for the second straight week a rookie has walked off the final hole on Sunday with their first professional win. Auburn alum Dominic Bozzelli, out of Pittsford, NY, put together four sub 70 rounds to claim the 2014 Spring Hill Classic held March 13th through 16th at Spring Hill Country Club in Tifton, Ga. The 12 under par 4 day total was a shot better than NGA Tour veterans and past winners, James Madison alum Jay Woodson (Richmond, Va.) and Michigan State alum Matt Harmon (Grand Rapids, Mich.). Woodson has two career Pro Series wins while 2010 NGA Tour Money Title winner Harmon, a Web.com Tour member the past two seasons, has four. 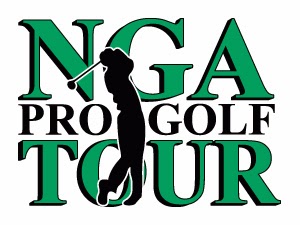 Also, for the second week in a row, a win wasn’t the only prize earned for the week. With the win Bozzelli earned an exemption into the Web.com Tour BMW Charity Pro-Am to be held May 15th through 18th in Greer, S.C. The exemption is the 28th granted to the NGA Tour since 2010, a number unmatched by any other tour in developmental golf. Exemptions 29 and 30 into the Price Cutter Charity Championship and Knoxville News Sentinel are still to be determined, with more on the way. With his win this past week; rookie Crawford Reeves earned free Pro Series entries for the 2014 season. Reeves failed to make the cut in this week’s event.

Bozzelli picked up $17,000 for the win while Woodson and Harmon each earned $7175 for finishing tied 2nd. The NGA Tour would like to thank the staff and volunteers at Spring Hill Country Club and the city of Tifton, Ga. for conducting such a first class professional event. The NGA Tour Pro Series resumes tournament play March 13th through 16th at Stone Bridge Country Club in Albany, Ga. for the 2014 NGA Tour Classic at Stonebridge. For more information on how you can volunteer, compete, or be a part of the NGA Tour or an NGA Tour event, please contact the NGA Tour offices at 800-992-8748.