(Boston, MA) - 2016 Senior PGA Champion, Rocco Mediate, who has been teeing off with the Vertical Groove Driver on the PGA TOUR Champions this season, will make his 2017 PGA TOUR debut at this week’s Zurich Classic, with the innovative driver in his bag. 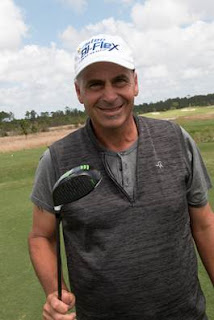 Mediate will team-up with Spencer Levin in the new format 72-hole team event, which features foursomes (alternate shot) and four-ball (best ball). With 80 teams competing, the field will be cut to 35 teams after the 2nd round.

Mediate, along with acclaimed long driver and two-time Major Champion John Daly, have been using the Vertical Groove Driver exclusively during tournament play in 2017. Moreover, the first-ever driver with vertical groove technology on its clubface continues to gain usage on the PGA TOUR Champions,  as several high profile players use the club in competition each week.

“When Rocco tested the driver for the first time, he told me he was going to hit it once, and if he didn’t like it, he was going to hand it back to me” said Jeff Barry, CEO, Vertical Groove Golf. “He went on to hit 40 drives on the range, and after hitting it so pure, he wanted to take the driver out on the course. He was hooked from his first shot, and has been hitting longer and straighter drives on tour ever since.”

The Vertical Groove Driver, which conforms to the Rules of Golf, is designed to reduce spin at impact, forcing tighter dispersion and leading to, on average, up to 40% straighter ball flight and up to 10 yards further in driving distance.

The 450cc Vertical Groove Driver, which is available in both right and left handed models, is offered in 8, 9.5, 10.5 and 12 degree lofts (right) and 9.5 and 10.5 degree lofts (left), while featuring a full range of Aldila premium grade, tour-proven aftermarket NV2K series shafts as standard.  The available flexes include: 45 gram L (Ladies), 50 gram A (Senior), 55 gram R (Regular), 65 gram S (Stiff) and 65 gram X (Extra-stiff).   At a length of 45.5 inches, the Vertical Groove Driver provides an optimum launch angle while maximizing carry distance and ball speed for many players. It is equipped with Golf Pride Tour Velvet grips in standard, midsize and oversize models.  Alternative shaft options from Fujikura, Mitsubishi and Aldila also will be available. Suggested retail price of the Vertical Groove Driver is $399.99.