Even In Drought Year, Golf’s Best-Designed Courses Will Still Shine 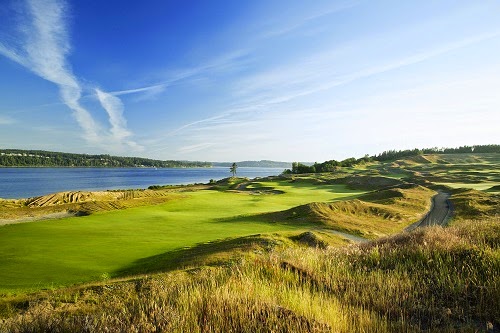 Chambers Bay, Site of the 2015 U.S. Open, Was Created to Minimize Water Use While Maximizing Challenge and Fun

(Palo Alto, Calif.) - While the National Weather Service forecasts continued drought for parts of the Western U.S. in 2015, there should be no drought of excitement at this year’s U.S. Open Championship at Chambers Bay, in Washington State.  The Robert Trent Jones II (RTJ II) layout was designed to minimize water use and play firm and fast— as it did when the U.S. Amateur Championship was played there in 2010.

Says Chairman and Master Architect Robert Trent Jones, Jr., “From the earliest plans we crafted Chambers Bay as an environmentally sustainable public golf course that would be good enough to host a Major championship.  We’ve paid great attention to the issue of effective resource management on golf courses, and Chambers Bay is a fine example.”

The firm has been know for designing environmentally responsible golf courses throughout the world for more than forty years.  From its transformation of reclamation sites such as an abandoned tin mine in Malaysia into The Mines Resort and Golf Club, to the creation of Wyoming’s Three Crowns Golf Club atop the site of a former oil refinery, to the design of Chambers Bay on a sand and gravel mine, RTJ II has been working for decades to clean up and protect the environment one golf course at a time.

The issue of water, in particular, has driven some of the most recent action at the storied design firm.  RTJ II’s 2014 renovation of the popular Poppy Hills Golf Course, in Pebble Beach, California, reduced the amount of irrigable turf by 14.5 acres, thus saving owners over $150,000 in water costs annually, reducing power requirements, and shrinking the carbon footprint of the entire golf course, all while making Poppy Hills firmer, faster, and more fun to play. The course garnered a collection of “Best New” awards from GOLF Magazine, Golf Digest, Golfweek, and other entities.  RTJ II also completed a similar 27-hole renovation at the Wisley, outside London.  Other projects have filtered and recycled water running off golf courses, were designed to utilize brackish water, and have otherwise enhanced and protected precious resources throughout the world.  The company has even issued its own green proclamation and water guidelines to ensure that every project they undertake emphasizes conservation of water and other precious resources.

Chambers Bay, located 35 minutes from Sea-Tac International Airport and an hour from downtown Seattle, is both a world-class public golf links and the key element of an environmentally responsible public works project.  Built on the former site of a sand and gravel mine, Chambers Bay anchors a 930-acre reclamation plan developed by Pierce County as an engine for economic development.