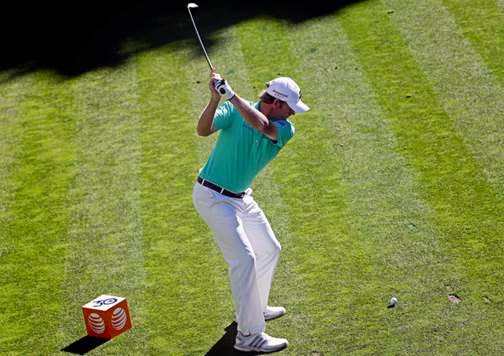 (Carlsbad, Calif.) – For the second time in as many weeks, the winner on the PGA TOUR wore adidas Golf’s new adipower Boost Footwear throughout the tournament. Following Jason Day’s dramatic playoff victory at Torrey Pines last weekend, it was adidas Golf Tour staffer Brandt Snedeker who jumped ahead early on Sunday and ran away from the field to win the AT&T Pebble Beach National Pro-Am by three strokes. Snedeker’s win at Pebble Beach is his second in two years there, having also won in 2013.

What You Need To Know:
· The win is Snedeker’s seventh victory on the PGA TOUR
· Snedeker’s win is the second win on the PGA TOUR for adidas Golf’s new adipower Boost footwear, designed to be the most comfortable, high-performance footwear the company has ever created
· Snedeker earns 500 FedExCup points with the win and is projected to move up 38 spots to 5th in the standings
· With the win, Snedeker earns a coveted spot in the 2015 Masters Tournament, which he has played every year since 2008, as well as a spot in the WGC-Cadillac Championship next month
· Snedeker’s final score of 22-under is a new tournament record

Throughout the tournament, Snedeker wore adidas’ newest high-performance golf footwear, adipower Boost, throughout the tournament. Boost is an industry-changing innovation years in the making, designed to deliver maximum energy return, responsiveness and unparalleled comfort by way of thousands of TPU energy capsules fused together by way of a proprietary high pressure steam molding process.