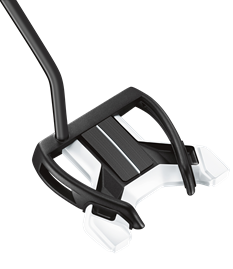 Crafted from the insights of TaylorMade Tour Professionals, the new designs feature an enhanced color scheme, including a luxurious black finish and white tungsten heel/toe weights, which frame the ball at address. A matte-black shaft and high-polish sole round out the premium aesthetics.

“The new tour-inspired cosmetic is visually stunning, while also delivering the ultimate in stability and performance,” said Tomo Bystedt, TaylorMade’s director of iron, wedge and putter creation. “Each of these putters promote an extremely stable putting stroke, to help golfers deliver a consistent roll time after time.” 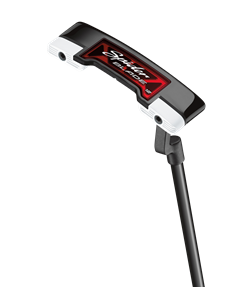 Daddy Long Legs is the most stable putter in the trio, with an MOI of more than 8,500.  The high-MOI design resists twisting at impact to protect ball speed on off-center hits, promoting a reliable roll regardless of where the ball is struck on the face.

The Daddy Long Legs (pictured on top) is the company’s most stable putter while the Spider Blade (pictured in middle) has MOI of more than 5,200.

At more than 5,200 MOI, the Spider Blade offers the stability of a mallet putter in a blade shape to promote outstanding twist-resistance and distance control on off-center hits. TaylorMade research indicates that the Spider Blade is 50% more stable than traditional blade-style putters*. All three models feature a heavy steel frame, and tungsten heel and toe weights, all designed to raise the MOI to deliver increased head stability. 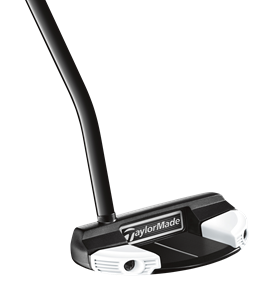 TaylorMade Tour Staff pros who contributed to the development of these premium putters include Sergio Garcia, who finished tied for second at The Open Championship using the new counterbalanced Spider Mallet; Jason Day; Boo Weekley; and Troy Matteson.

Garcia played the Spider Mallet (pictured on bottom) to record just 26 putts in his artful final round at The Open Championship.

*Stability gain is based on comparison of overall club MOI values in the primary stroke plane vs. traditional putter (Daytona 12).

Pricing, Options and Availability
The new Daddy Long Legs is priced at $249, while the Spider Blade and Spider Mallet retail for $229. Each model is offered in a single bend 35” or 38” shaft. For more information, visit taylormadegolf.com
Posted by Blogger at 12:54 PM