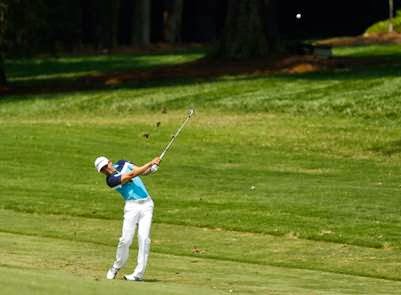 (Carlsbad, Calif.) – In the PGA TOUR’s final tournament before the FedExCup Playoffs, it was TaylorMade-adidas Golf Tour staffer Camilo Villegas (@CamiloVillegasR) who emerged victorious, taking advantage of prime scoring opportunities to win the Wyndham Championship by one stroke at Sedgefield Country Club.

What You Need to Know:
· TaylorMade ranked #1 with 75 drivers, 90 fairway woods and 42 iron sets in play
· Villegas’ victory is the 37th worldwide win (all tours) for TaylorMade Drivers and the 10th on PGA TOUR in 2014
· His final round 63 ties lowest final round score by winner on the PGA TOUR this season
· Camilo’s win is his 4th career victory on the PGA TOUR and is projected to jump 68 spots to 37th in the FedExCup point standings
· Villegas is the seventh adidas Golf tour staffer to win on the PGA TOUR this season, and his victory is the fifth for the company’s new gripmore line of footwear

Off the tee, the 32-year-old Columbian used his JetSpeed driver, hitting long and accurate drives off the tee to set himself up for multiple scoring opportunities around the greens. He made the change to the driver at this year’s Humana Challenge and has kept it in the bag since. Villegas also gamed the Tour Preferred CB irons (5-pw), which he added to his bag at the same time as his JetSpeed driver. His first win of the 2014 PGA TOUR season is another for the revolutionary speed pocket technology found in TaylorMade’s Tour Preferred irons. Villegas also played TaylorMade’s new Tour Preferred golf ball, engineered for players seeking more spin on iron shots.

In addition to his bag full of TaylorMade clubs, Villegas wore adidas Golf’s pure 360 gripmore Sport footwear, which he first put into play in June prior to the FedEx St. Jude Classic. An evolution in golf footwear, gripmore technology is an innovation in golf footwear cleat design that combines the performance benefits of spiked and spikeless footwear into one revolutionary technology. He also wore TaylorMade headwear and accessories throughout the tournament.