(Carlsbad, Calif.) – Ashworth Golf, the most authentic golf brand dedicated to bringing modern style to the golf course, today announced the release of the final installment of the Ashworth Majors Series, concluding the collection with a limited-edition golf shirt inspired by the 1993 PGA Championship victory of Ashworth brand ambassador Paul Azinger. 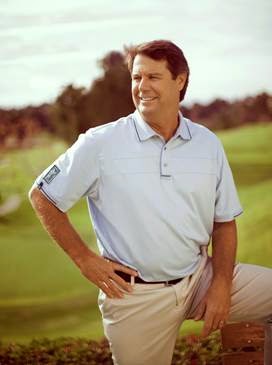 Incorporating elements specific to each player’s major tournament win, Ashworth designers utilized premium fabrics and unique contrast threads throughout to ensure a piece distinctly representative of each player. Each shirt in the series is individually numbered inside of the placket, with the total quantity produced matching the winning player’s total score.

The sixth and final golf shirt in the prestigious Ashworth Major Series collection is dedicated to Paul Azinger’s sudden-death playoff victory at the 1993 PGA Championship at the historic Inverness Club, an everlasting victory that added to his storied legacy and earned him a place among some of the greatest to ever play the game.

Azinger’s piece, limited to 272 total units to match his winning score at Inverness, features his signature embroidered inside the back neck, contrast threading and piping and the historic date of his major championship (8/15/93) stamped on the second placket button. Similar to the previous five golf shirts in the collection, Azinger’s specially-designed golf shirt features the unique Ashworth Majors Series patch on the right sleeve.

“The fit, feel and performance of Ashworth apparel is second to none; it’s exactly what I need and want in my apparel both on and off the course,” said Azinger. “I’m truly humbled that Ashworth has designed a golf shirt commemorating my PGA Championship, one of the greatest accomplishments of my career.”

Available in limited quantities, the Paul Azinger commemorative Ashworth Majors Series golf shirt will be available exclusively at ashworthgolf.com at an MSRP of $100.
Posted by Blogger at 12:01 PM