(Franklin, TN) - SeeMore congratulates its most visible putter user for earning his way onto his fourth Ryder Cup Team. In the last 12 months, he has played some of the best golf of his storied career, with 27 starts on the PGA Tour and three wins ('13 BMW Championship, '13 Northwestern Mutual World Challenge and '14 Hyundai Tournament of Champions), nine Top 10 finishes and $6 million in earnings (or more than $220,000 per start). 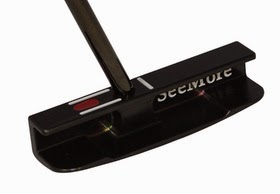 He is currently ranked No. 15 in the Official World Golf Rankings. All 12 of his PGA Tour wins, including the 2007 Masters, and every one of his clutch putts over three Ryder Cup and three President Cup appearances, have been made using his milled SeeMore FGP, putting his career earnings at more than $33 million - good for 12th on the all time PGA TOUR career money list. His career Ryder Cup record is 6-4-1, including 3-1 in the epic 2012 matches at Medinah.

SeeMore Putter Institute
SeeMore has launched the SeeMore Putting system to golfers in the form of introducing the SeeMore Putter Institute (SPi), where golfers and instructors will be able to come together in person and online to share these fundamental ideas about how to improve putting performance. Presently over 315 global instructors are utilizing SPi to generate more lessons, more revenue and more game improvement.

SPi is a learning system based on the simple fundamentals of finding the proper grip, alignment, stance, and posture. This allows for a natural, free, and simple putting stroke on each and every putt. It is based on the technology built into the SeeMore putter itself, and on the refined teachings of SeeMore Global Ambassador Pat O'Brien. O'Brien has worked with Zach Johnson, and many other PGA Tour and developing players. O'Brien has been teaching the SeeMore System around the world for more than 14 years, ever since he watched his good friend, the late Payne Stewart benefit from the SeeMore putting system to win 1999 US Open and lead the tour in putting statistics that year.

Becoming SPi Certified will help golf teachers formulate a complete teaching plan to help their existing students and recruit new students to become great putters using the SeeMore system that has won two Major Championships and set numerous putting records on the PGA Tour. It is a complete game plan, which will give any golf instructor a new level of confidence in the proper teaching and fitting involved in putting instruction. Becoming certified to teach the system initially consists of online training, but also includes personal coaching. Contact us for more information about becoming a SPi certified staff member at putterinstitute@seemore.com or call 615-435-8015.

RST Technology SeeMore's patented RST, known by a visible gun sight on the top line, allows the golfer to set up the putter perfectly each and every time in relation to the intended target line. This is accomplished by lining up the black bottom portion of the shaft between two white lines and covering a signature red dot on the heel of the top line. The process is like locking radar onto a target. The two parallel white sight lines frame the shaft and serve as an indicator that the golfer is in perfect position to make a consistent and reliable stroke.
Posted by Blogger at 4:07 PM