Englishman to Showcase Re-Launched Sportsman Line at Pinehurst No. 2

(LEICESTER, England) – Wolsey – one of the world’s oldest existing clothing brands and a pioneer of premium men’s apparel for sporting endeavors – announces that Tom Lewis will compete in its Sportsman line during the 2014 U.S. Open Championship, June 12-15 at Pinehurst No. 2. 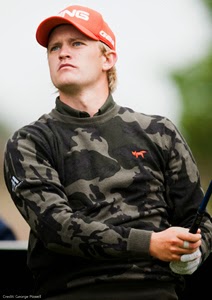 Displaying the distinctive Wolsey fox logo on his left chest, the 23-year-old English star punched his ticket to America on May 26 via the international sectional qualifier at Walton Heath Golf Club. Playing in steady rain that saw him don Wolsey’s vaunted knitwear, among other pieces, Lewis sank a 30-foot birdie putt on the second playoff hole to claim his spot in the championship field.

“We’re hoping for warm weather during U.S. Open week so Tom can really showcase our performance polos,” says Wayne Webster, Wolsey’s Golf Sales Director. “While his career is just getting started, Tom certainly has the talent to hoist the U.S. Open Trophy like Tony Jacklin did during the era he proudly represented Wolsey.”

One of the brightest young lights in British golf, Lewis turned pro in late 2011. He promptly won the European Tour’s Portugal Masters and went on to be crowned Sir Henry Cotton Rookie of the Year. That came after a highly successful amateur career which included wins at the Boys Amateur Championship, St. Andrews Links Trophy and as a member of the GB&I Walker Cup team. Lewis also shot a first-round 65 to earn a share of the lead at the 2011 Open Championship and ultimately captured the Silver medal as that year’s low amateur.

Recently re-launched, Wolsey Sportsman will premiere for Autumn/Winter 2014. It uses traditional British menswear colors in a clean and subtle manner. These combine with minimal and strong textual patterns to create a “less-is-more” aesthetic.

Featuring a fit that is more middle ground than slim, the collection includes breathable, waterproof and multi-layered outerwear, along with performance polo’s, base layers, knitwear and pants. Many pieces rely on Invista THERMOCOOL technology that dual regulates body temperature to ensure the sportswear is “fit for purpose.”

For more information: www.Wolsey.com.
Posted by Blogger at 8:30 AM