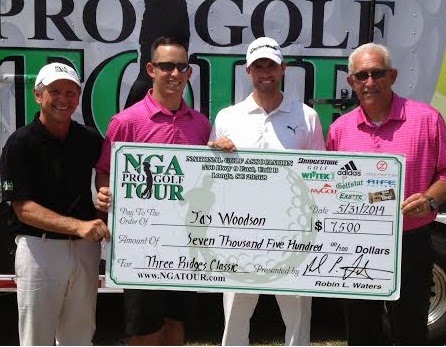 (Knoxville, Tenn.) – When Jay Woodson made the decision to switch to golf full-time following a stellar high school football career as a quarterback/defense back where he earned All-State Honors, he knew something the rest of the world didn’t, he was destined to play golf professionally. And not just play, but to be a champion. After his victory in Knoxville at the Three Ridges Golf Classic, his third on the NGA Tour’s premier Pro Series, the Richmond, Virginia native added to a list of career accolades not seen by many.

Woodson, a two-time All-Conference team member and Conference Player of the Year during his senior year at James Madison, made an almost immediate impact on the world of professional golf, winning in just his 3rd NGA Tour event after turning pro in 2004. He’s added seven victories on the NGA Tour Carolina Series and back to back State Amateur and State Open Championships in addition to the two additional Pro Series wins. Looking back, most would say it’s safe to say he made the right decision.

Woodson’s third Pro Series win didn’t come without its challenges. As if taming the challenging Three Ridges layout, which used to play host to the Knoxville Open when the Web.com Tour was known as the Nike Tour, wasn’t enough, Woodson would have to fend off challenges from two of the other top players on the NGA Tour this year, North Florida alum JC Horne and former Ball State star Patrick Wilkes-Krier. Horne started the final round seven shots behind third round leader, 2012 NGA Tour Player of the Year and Eastern Kentucky alum Brandon Brown, and, while his 6 under par 65 was good enough to catch Brown, it left him tied for third and three strokes behind Woodson, who shot a final round 67. Wilkes-Krier, who was alone in third heading into Sunday’s final round, fired a 5 under par 66 to finish in solo 2nd, two shots behind Woodson. Middle Tennessee State alum Hunter Green finished at 8 under par for the event and alone in fifth. Two-time Pro Series winner Tyson Alexander, the former Gator who earlier this year won the NGA Tour Ocala Marion Open and an exemption into the 2014 Knoxville News Sentinel Open, finished tied for 6th with Oklahoma State alum Brad Gehl. First Round leader Brian Richey, who played collegiately at Florida Southern, finished tied for 8th with Web.com Tour member and Lamar University alum Casey Clendenon and UT Chattanooga alum and Knoxville’s own Jonathan Hodge.

The NGA Tour would like to thank Club Manager Mark Brown, Head Superintendent Curtis Pique, and the entire Three Ridges Golf Club staff, membership, and volunteers for conducting one of the top annual events on the NGA Tour schedule. The tour resumes play June 5th at Chattahoochee Country Club in Gainesville, Georgia for the 4th annual Milton Martin Honda Classic. Spectators are welcome and, as always, admission is free to the public.