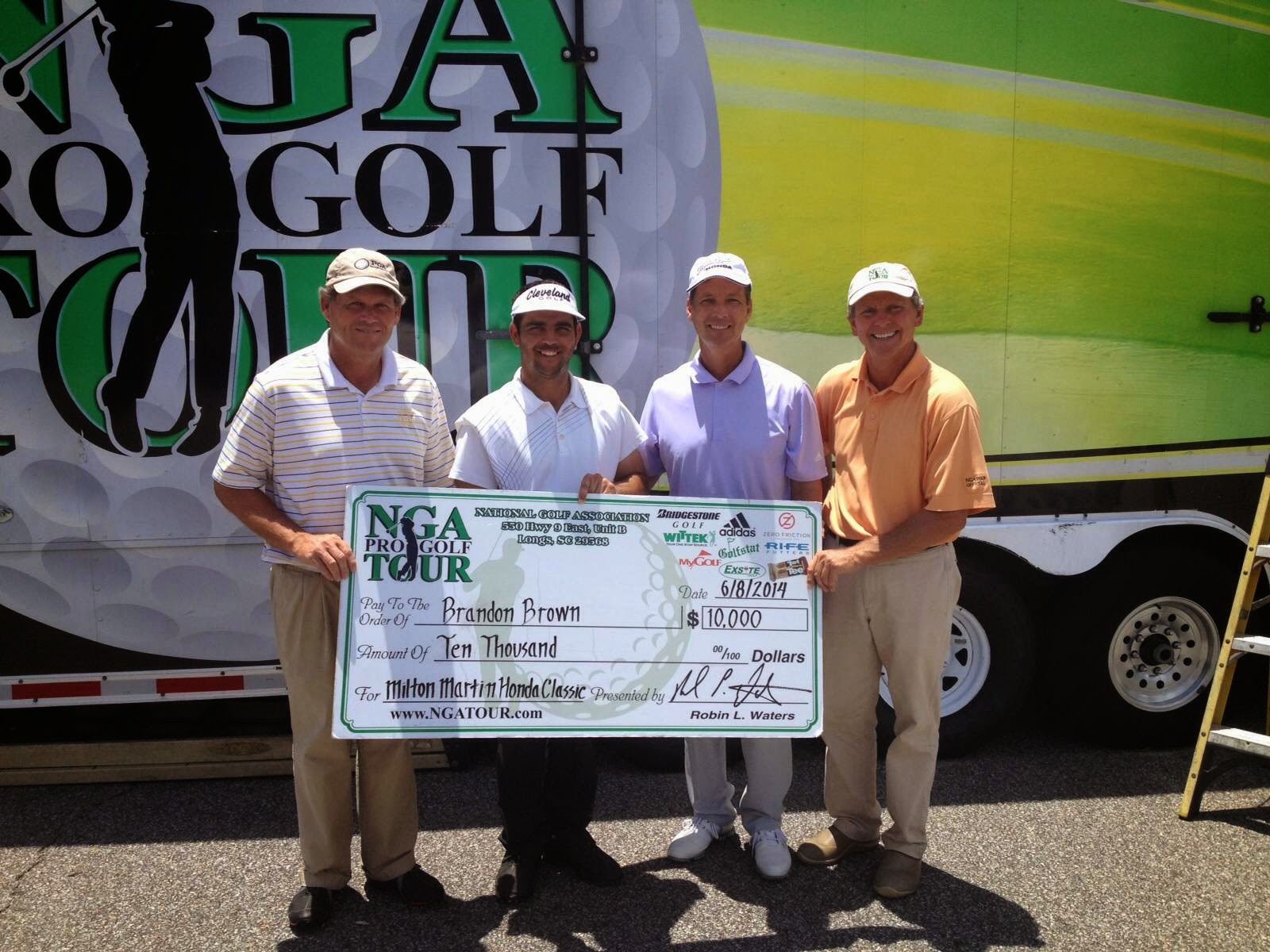 (Gainesville, Ga.) – There’s no place like home and apparently for Brandon Brown, one of the NGA Tour all-time career earnings and wins leaders, Gainesville Georgia reminds him an awful lot of his hometown Shelbyville, Kentucky. The Eastern Kentucky alum tied the course record 62 in the opening round of the 2014 Milton Martin Honda Classic and finished the four day event at 20 under par for his eighth career NGA Tour Pro Series win and second in Gainesville, with his first coming in 2011.

“This is definitely a nice place to come to,” stated the two-time NGA Tour Money Title Winner and 2012 NGA Tour Player of the Year, “Gainesville reminds me of my hometown and it kind of feels like home.”

Brown played his opening round as if he were raised on the championship Chattahoochee design, eagling two out of the next three holes following his only bogey of the round on hole 14. Brown followed his record tying round with an impressive 7 under par 65 the second day giving him a commanding lead heading into the weekend. And while he entered Sunday’s final round with a four stroke no one was able to get closer than three shots as Brown closed out the win.

UK alum Andy Winings fired a final round 69 to move from third into a tie for 2nd with Auburn alum Patton Kizzire who shot a final 67 to move up from 4th. Delaware alum Justin Martinson, who was in solo 2nd heading into the final round, shot an even par 72 and fell to 6th. New Mexico alum James Erkenbeck and College of Charleston alum Paul Borwn finished T4. Former LSU star Ken Looper made the biggest jump of the day, moving from 26th into the money line at T12 after a final round 66, tying Erkenbeck for low round on the day.

Brown earned $10,000 for the win and also takes the lead for the NGA Tour’s exemption into the Web.com Tour Utah Championship. The Milton Martin Honda Classic is the first of two stops, along with the NGA Tour Cutter Creek Classic as the other, to determine the NGA exemption winner. This is the third consecutive year the NGA Tour has been awarded an exemption into the Utah Championship. Kizzire and Winings each earned $4500 for their T2 finish, leaving them in prime position to challenge Brown at the NGA Tour’s next event, the Cutter Creek Classic.

The NGA Tour would like to thank Club Manager Rodger Hogan and the entire Chattahoochee Country Club staff, membership, and volunteers for conducting one of the top annual events on the NGA Tour schedule. The tour resumes play June 16th at Cutter Creek Golf Club in Snow Hill, N.C. for the tour’s annual Cutter Creek Classic where the NGA Tour exemption into the Utah Championship will be determined. Spectators are welcome and, as always, admission is free to the public.